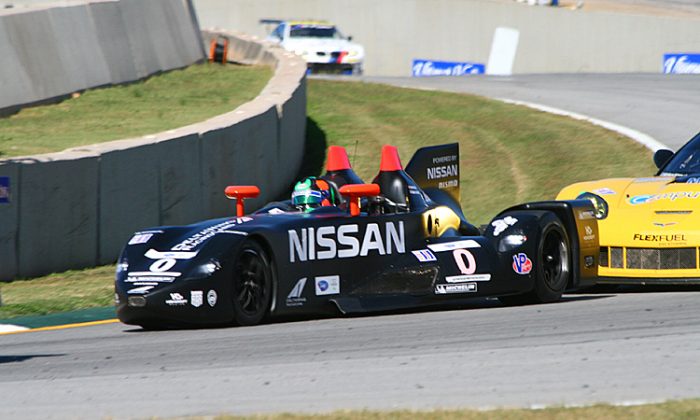 After four hours of racing Nicolas Prost in the #12 LMP1 Rebellion Lola Toyota leads Dario Franchitti in the #055 LMP2 Level 5 HPD-Honda, with Martin Plowman in the #37 LMP2 Conquest Morgan-Nissan in third.

The #95 Level 5 HPD, which is trying to capture the P2 title, is circulating safely in sixth.

Gunnar Jeanette is fifth overall with the unclassified DeltaWing, on only its second set of tires.

Jani has four laps on the field. Plowman, Franchitti, and Mark Patterson in the #20 Dyson Lola-Mazda (not the hybrid) are all four laps down on the leader, and the DeltaWing is five laps behind.

The #6 P1 Muscle Milk HPD-Honda, fighting for a class win, lies 38th, 52 laps down after getting hit by the #34 Green Hornet Porsche one hour into the race.

One place behind the Muscle Milk car is the #16 Dyson Lola-Mazda Hybrid; the Dyson machine lost 54 laps to electrical problems.

The P1 championship battle is wide open: Muscle Milk has to complete 70 percent of the race distance to clinch the championship, which should still be possible, but any further delays could open the door to the Dyson car, which will have to score ten more points than Muscle Milk to take the P1 title.

Toni Vilander in the #021 Extreme Speed Motorsport Ferrari 458 leads in GTE-Pro, 11 laps down. This is the car whoich inherited the pole when its team car, the #02, had its qualifying time rejected because its splitter had broken and hung too low.

The Corvettes run second and third in class, with Richard Westbrook in the #4 C6 R1 ahead of the Antonio Garcia in the #3 car.

After 198 laps—half the 1000-mile maximum distance—the course was under caution, the running order essentially unchanged from thirty minutes earlier, with a pair of updates: Marino Franchitti in the Level 5 HPD took the P2 lead, and second overall on the restart as Martin Plowman in the #37 Conquest Morgan got briefly balked by a GT Ferrari.

Also Olly Gavin in the #3 Corvette got past Scott Sharp in the #021 #ESM Ferrari to take the GTE-Pro lead, with Jorg Bergmeister in the #45 Flying Lizard Porsche in third.

Mark Wilkins in the #06 Core Ore ca leads in PC, and newcomer Sean Johnston in the #11 JDX Porsche leads PC.