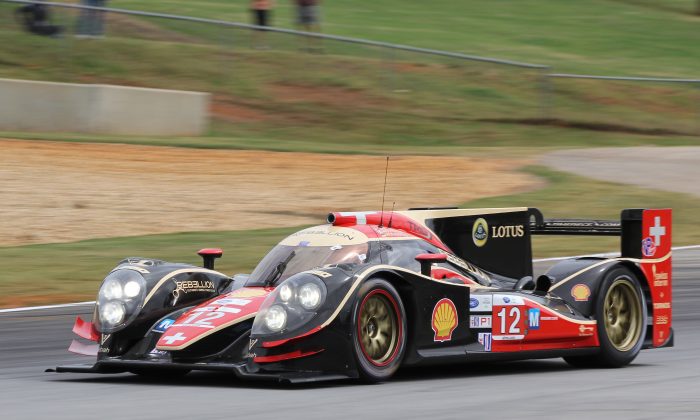 BRASELTON, Ga.—2012 Petit Le Mans winner Rebellion Racing has announced loudly that it is back to defend its title. The Swiss-based team brought its Lola B12/60 back to Road Atlanta where co-drivers Nicolas Prost, Neel Jani, and Nick Heidfeld consistently set fast times.

Prost’s lap wasn’t the fastest of the three-day test; Nick Heidfeld sat that (1:09.816/130.973 mph) on Monday. Satisfied they were quick, the crew used Wednesday’s session to experiment with different set-ups.

“We didn’t run the same configuration as Monday” said Prost told ALMS.com. “But my teammates were all very close, just like we were on Monday, and I think that’s the key to this race. I think we’ve prepared quite well, but it’s going to be a long and hard race.”

Muscle Milk has already locked up the 2013 P1 title; P2, GTE, LMPC, and GTC will all be decided Saturday.

Ryan Briscoe was quickest in P2, hustling the #551 Level 5 HPD ARX-02b around in 1:12.770 (125.656 mph). Briscoe and co-driver (and team owner) Scott Tucker have a slim six-point lead in the class over Extreme Speed Motorsport’s Scott Tucker, who has yet to show his true speed.

BMW was quickest in the very competitive GTE class. Dirk Müller set a time of 1:19.299 (115.310 mph) in the afternoon test. Points leaders Jan Magnussen and Antonio Garcia were not particularly quick Wednesday, but made up for it by looking good and sounding fantastic.

A rookie was quickest in PC. Shawn Rayhall, who will be starting his first ALMS race Saturday, topped the class with a lap of 1:16.131 (120.109 mph)in his #25 8Star Oreca. Rayhall, 18 years of age, won’t be the youngest driver in the race; that honor will go to 17-year old Tristan Nunez in the #18 Performance Tech Oreca, who ran fourth in the session.

Thursday and Friday morning will be devoted to practice, with qualifying starting Friday afternoon. The race starts at 11:30 a.m. on Saturday, Oct. 19, and runs for ten hours of 100 miles, whichever comes first.