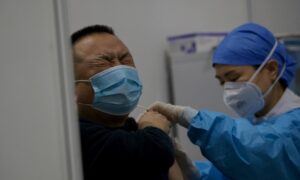 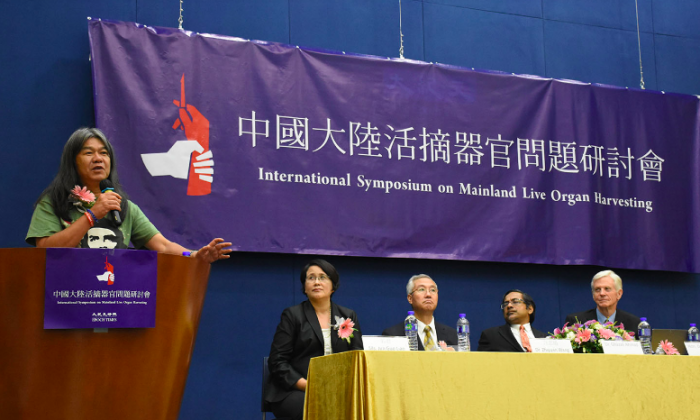 HONG KONG—On the penultimate day of The Transplantation Society’s premier industry congress at the Hong Kong Exhibition and Convention Center, a smaller conference with a slightly different focus was held by Epoch Times Hong Kong a short distance away.

The Epoch Times Hong Kong event, which ran for slightly over two hours and included half a dozen speakers, was almost solely on what speakers and organizers characterized as the genocidal abuse of transplantation in China.

The rationale for this optic was put plainly by Cheryl Ng, the spokesperson for Epoch Times Hong Kong.

“We feel a social responsibility to let the public know about this issue, and present a different view from the sanitized version of the reality of transplantation in China that may otherwise be presented,” she said in an interview. “We want to give the victims back a voice.”

Epoch Times was the first media to report on mass organ harvesting of prisoners of conscience in 2006—claims received with open skepticism in some quarters at the time.

A decade later, there is a growing sense of recognition that indeed, large numbers of innocents have been used as an organ source. The primary victims of this activity, experts believe, are practitioners of Falun Gong, a pacifist spiritual practice that teaches the values of truthfulness, compassion, and tolerance.

The paper has reported closely and aggressively on the Communist Party’s campaign against this population, Ng said, as well as the Falun Gong community’s resistance to suppression.

The half-dozen expert speakers at the forum included David Matas and David Kilgour, a lawyer and former member of Canadian Parliament respectively who have authored some of the most prominent reports on organ harvesting in China; Dr. Ghazali Ahmad, a nephrologist who came from Malaysia; Dr. Maria Singh (appearing via Skype), a board member of Doctors Against Forced Organ Harvesting; and several nongovernmental researchers who have tracked transplant abuse in China with their own research.

David Matas focused on his and his colleagues new research, which led to an estimate that between 60,000 to 100,000 transplant operations were taking place in China annually.

The estimate was based on a hospital-by-hospital examination of bed counts, staff numbers, grants and awards, publications, the construction of new transplant wards, and more. It looked closely at 164 hospitals, and presented a survey of the over 700 that have done transplantation in China over the years.

“What that data tells us consistently, hospital by hospital, looking at all factors in combination, is that transplant volumes in China are far larger than the official national figures,” Matas said.

Dr. Ghazali had come from Malaysia to present data directly from that country’s public database of renal transplantation recipients. The most striking datapoint he highlighted showed that kidney grafts from supposedly dead donors from China functioned as well as live donors from Malaysia. The implication of this is that in China, kidneys were retrieved from individuals killed for that purpose.

Dr. Wang Zhiyuan, a former military doctor in China and a founder of the nongovernmental research group World Organization to Investigate the Persecution of Falun Gong, gave a condensed version of his intense dive into the evidence of organ harvesting in China, available in video online.

The talk, titled “Ironclad and Irrefutable Evidence,” is a dissection of official Chinese publications which, Dr. Wang says, show incontrovertibly that organ harvesting in China is large-scale, state-run, and that it targets a non-death row imprisoned population.

Given that practitioners of Falun Gong constitute the largest group of prisoners of conscience in China, they are exempt from all protections of the law, and Falun Gong refugees report receiving strange blood tests in custody, the consensus of researchers has rested on the conclusion that this population is heavily targeted for organ harvesting.

It’s a conclusion increasingly accepted as accurate, including by prominent political figures in the United States and Europe.

In a speech in June on the floor of the U.S. House of Representatives urging the passage of a resolution that expressed concern over state-sanctioned organ harvesting in China, Representative Ileana Ros-Lehtinen said,  “Followers of Falun Gong are among China’s most vulnerable to state-sanctioned abuse, which leaves them as likely victims to this ghoulish practice.”

Congressman Chris Smith was one of the backers of that resolution, which passed unanimously. He wrote to the organizers of the conference in Hong Kong:

“The Chinese government says it is moving toward adherence to ethical standards and accepted procedural guidelines, but in the absence of accurate and transparent information, and with a history of repression and censorship, we cannot take the word of Chinese officials at face value.”

“There is clear evidence that suggests that the organ trade continues in China, that the organs of prisoners continue to be harvested without consent, and that a system of hospitals exist to profit from the sale of these organs,” the letter said. “This is unacceptable, reprehensible, and illegal and the practice of organ harvesting must be ended immediately,” Smith wrote.

Edward McMillan-Scott, former vice-president of the European Parliament, sent a letter to the conference, recounting how he had traveled to Beijing in 2006, meeting witnesses who described that:”the Chinese regime was forcefully harvesting the organs of imprisoned Falun Gong practitioners, for sale to the booming organ transplant industry.”

Martin Patzelt, a member of the Human Rights Committee of Germany’s Parliament, said in a letter to the forum that: “All the democratic countries in the world should pass such kinds of resolutions,” as that recently passed by the U.S. Congress.

A delegation of observers from a U.S. Congressional office, as well as a number of local diplomatic representatives, were also in attendance at the forum, according to organizers.

The Legislative Council member Leung Kwok-hung, most well-known by the moniker “Long Hair,” was a moderator for the event (wedged between a court appearance he was scheduled for later in the afternoon.)

While expressing solidarity with those seeking to shed light on the abuses in China, Leung said he was saddened by the fact that “not a single doctor from Hong Kong” appeared at the forum.

“I urge the doctors in Hong Kong… to do a good job for the Chinese people” by investigating and adding their voice to the issue, he said on stage, wearing his trademark T-shirt.

“I feel a little bit embarrassed. Not even one single doctor came here. I wish that at the next meeting there will be delegations from China and Hong Kong attending this forum.”