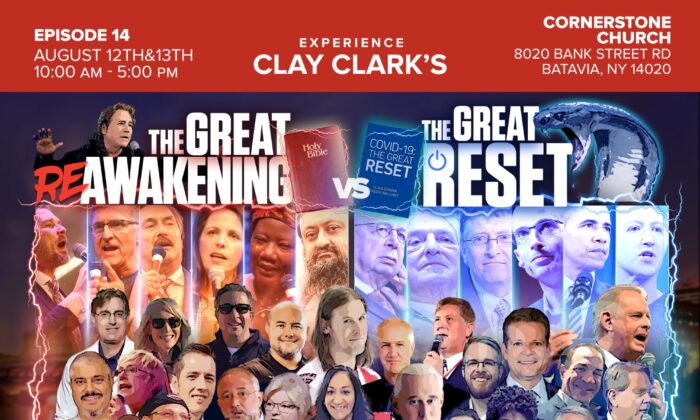 Samantha Flom
Samantha Flom is a freelance political reporter for The Epoch Times. A graduate of Syracuse University, she has a background in journalism and nonprofit communications. Contact her at scflom@gmail.com.
View profile
Follow
biggersmaller
Print

The ReAwaken America Tour is heading to New York, unshaken by recent attempts to de-platform the event.

Initially planned for Rochester, the upcoming stop on the faith-fueled tour has been moved to Batavia after the original venue backed out of hosting the event.

“(In response) to the outpour(ing) of concern from our community, both good and bad, I have decided after careful thought to cancel the ReAwaken America Tour that was scheduled in August 2022,” he said. “I have always appreciated the support from our city and I believe it is my turn to show my support back. I hope to see you all at future events here. (Apart from the ones who have threatened myself and staff, you are not welcome).”

The cancelation followed the circulation of an online petition to cancel the event, signed by more than 2,300 area residents, which alleged that those involved with the tour were “promoters of violence” and that the event was “likely to draw white supremacists and other members of hate groups.”

However, tour founder and organizer Clay Clark has asked people to hear him out on why such politicized claims are baseless.

“Five of the seven pastors that are on the tour regularly are black, so it’s hard to say that it’s a ‘racist, white supremacist event’,” he said. “As far as inciting violence, we’ve had candlelight services, we have baptisms at every event, and we encourage people to pray for our country. So nothing could be further from the truth.”

Nonetheless, according to Clark, venue cancelations are not a novel occurrence for the tour.

“I typically have to book four or five venues to get a verbal commitment from them before I announce the venue because I know that four or five will cancel before the event happens,” he explained. “That’s just the level of attack that we have right now.”

One source of political attention could be the event’s lineup of speakers. Featuring high-profile conservatives like Eric Trump and MyPillow CEO Mike Lindell, as well as popular Christian faith leaders like Canadian Pastor Artur Pawlowski and Amanda Grace, the event could be described as a cross between CPAC and Sunday church.

Formed in defiance of the COVID-19 lockdowns and mandates, the event challenges the World Economic Forum’s claims of a need for a “Global Reset” to “revamp all aspects of our societies and economies,” countering them with a call to return to God and America’s founding principles.

“It’s the Great ReAwakening versus Klaus Schwab’s ‘Great Reset’,” Clark explained. “That’s the theme of it.”

As for the idea behind the event, Clark attributes that to his background as a businessman.

From Poor to Not-Poor at 15

Raised from humble means, Clark discovered at a young age that he had a knack for business, founding his first company at just 15 years old.

“I went from poor to not-poor,” advised the entrepreneur, who has since founded several multi-million dollar companies, including Thrive15.com, an online business school.

Soon, other business owners began to seek Clark’s advice for growing their own companies, and by the start of the COVID-19 pandemic, he had taken on 160 clients as a business coach.

“I’m kind of like a company turn-around guy,” he explained. “So when the lockdowns and the quarantines and the curfews and all that rhetoric began spilling out of CNN, my clients all turned to me and said, ‘What are we going to do?’ … ‘How am I going to have a successful company if I can’t be open?’”

The answer, Clark decided, was to push back. In an effort to keep his city open, he sued the mayor of Tulsa, Oklahoma, and then turned his building into a church because the other churches were closed.

Then, still feeling called to do more, he reached out to his friend and fellow critic of the COVID lockdowns, Lt. Gen. Michael Flynn, to discuss taking further action.

“I called [Flynn] and said, ‘I think God wants us to do an event where we share the truth about election fraud, medical fraud, and religious fraud, and we get people back to God,” Clark recalled. “I thought he would maybe ponder it or think about it for a while, but he immediately said, ‘I know. Let’s go. It has to happen through the church.’”

“We had 50,000 people request tickets and we had just over 5,000 people in attendance,” Clark noted. “But what blew my mind was we had over 7 million people that streamed it all throughout the world on all the platforms.”

A Fight for Faith and Freedom

Since that first event in April 2021, the tour has visited 12 other cities around the country, sparking both revival and resistance in the local communities.

But for many of the tour’s speakers, political attacks are nothing new, as, according to Flynn, challenging mainstream narratives was always the purpose of the tour.

“At the beginning, it was really exposing the truth about the lies and the deception coming out of our own government as it related to COVID,” the retired lieutenant general said. “But it was also about what we were learning about the fraud in our election system and our processes, particularly from the November 2020 election. So that was kind of the beginning, and then it took on a life of its own because we realized there was a huge demand for honesty and authenticity.”

Still, the risks associated with speaking out, he added, are not lost on the tour’s speakers.

“There’s an awful lot of personal courage, moral courage, intellectual courage that’s displayed by all of the guests that we have speaking on the tour,” he noted. “There’s some really high-speed people that we have on—a very large number of subject matter experts in their own fields—that speak about the issues of the day and the times that we are in. So this is a really important effort to do exactly what the title says, which is to reawaken America.”

Despite the opposition, Flynn said that the ReAwaken America Tour is important as it brings hope to those who feel disenfranchised in the current political climate.

“It strengthens their faith in themselves, in their own religious beliefs, in their beliefs about their families and their communities, and it gives them hope that there are other people out there that are champions fighting for these different issues,” he said. “And it also inspires people to get involved.”

For Clark, the tour is a way to reconnect Americans not only with themselves and like-minded individuals but also with God.

“We talk about having God-given rights, but we as a nation have allowed God to be taken out of everything,” he said. “We’ve got to put God back in everything.”

The next stop on the ReAwaken America Tour will take place Aug. 12-13 at Cornerstone Church in Batavia, New York. Tickets for the event can be requested at TimeToFreeAmerica.com.

Adding that attendees can pay whatever price they feel is right, Clark said what is most important to him is that people come to know Jesus.

“Goal number one is to lead people to Christ,” he said. “You can’t put your hope or trust in anything but God. And second, as a byproduct, if we could save the nation, then that would be great, too.”

Samantha Flom
Follow
Samantha Flom is a freelance political reporter for The Epoch Times. A graduate of Syracuse University, she has a background in journalism and nonprofit communications. Contact her at scflom@gmail.com.