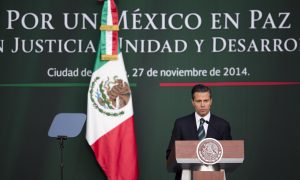 Scott Stewart: Hello, I’m Scott Stewart, Stratfor’s vice president of tactical analysis. And I’m joined today by my colleague, Tristan Reed, who’s our lead Mexico crime and security analysts. And today we want to talk about the differences or changes in the way that we think about organized crime in Mexico. So, Tristan, we’ve talked about — you know, internally and even externally for a few years now — this concept of the Balkanization of Mexican organized crime and how it’s impacting really the cartel landscape there. What does this mean going forward, though, as far as, you know, analytically, the way that we look at organized crime?

Tristan Reed: Well, one, it’s important to remember that it’s a natural process with law enforcement pressure on these criminal organizations. It’s unsustainable to have highly centralized organizations when you’re — when an arrest of one individual can disrupt an entire supply chain. So, at this point now we’re looking at three regional umbrellas with a half-dozen crime groups in each. And what that means is the days of the Los Zetas against Sinaloa Federation, or you know, interregional violence and campaigns against one another, those are pretty much over. Now, instead we’re going to be seeing smaller geographic niches competing for territory.

Scott: So, you’re saying we’re not going to see the huge cartel wars like, you know, Sinaloa trying to take over Juarez, but we’re still going to see smaller conflicts in those cities for, you know, turf?

Tristan: And a good example right now is in western Chihuahua, actually southwest Chihuahua, closer to the Golden Triangle, where there are several different groups competing just for that small little geographic niche. All those crime groups fall under the Sinaloa Federation umbrella, but it shows you the decentralization of the Sinaloa Federation.

Scott: So, that’s basically a result of the leadership being decapitated and then kind of falling into these smaller groups that are fighting amongst each other.

Tristan: The reasons for the split-offs can vary. One can be, you know, where a crime boss falls and there’s a power struggle and suddenly you now have multiple crime groups from what was one. But there can also be an intentional aspect to it that’s obviously much more difficult for us to be able to gauge, where upper echelons of a criminal structure sort of let their subgroups and, you know, their lieutenants work on their own, mainly for the sake of splitting up the supply chains — the responsibility for it at least.

Tristan: We will see them operate differently but they’re going to continue to expand. Mexico is obviously geographically positioned with the U.S., which means that Mexican organized crime has this advantage because they are the only neighbors to the south of one of the largest consumer markets for illegal drugs. This is going to allow these smaller crime groups to continue to expand. So collectively we’re going to see Mexican organized crime continue with the same trend where we see them opening up markets in Europe and Asia.

Scott: But as far as the ownership now, so we’re not really going to see like what we had in the past with Sinaloa owning almost all the way into the Peruvian jungles with the coca leaf or paste, then kind of moving everything up almost to retail in the U.S. That’s going to be segmented, right?

Tristan: Yes, correct. It’s going to be segmented. It’s also going to mean that the criminal brandings that we’re accustomed to at some point are going to begin to decline, where you’re going to have more anonymous figures because you don’t have that high-profile, extremely powerful crime bosses, you know, such as El Chapo. So, things are going to become much more murky when we’re looking at specifically which Mexican crime group is operating in Peru or Argentina, you know, who is pushing illegal drugs to Spain.

Scott: OK, and that is really going to create issues for law enforcement, too.

Scott: Because it’s going to be harder to track. In many ways, it’s almost like what we’ve seen happen — and I’m writing about a lot on the jihadist front — kind of the move to this leaderless resistance from a hierarchical model. And that’s very much of what you’re talking about happening in Mexico with organized crime.

Scott: Now what does the decentralization mean in terms of the types of crime that these OC cells are committing now?

Tristan: So, with smaller crime groups, even though there are more for security forces to have to deal with, they’re less powerful, they’re less resourceful. You know, the Gulf cartel for instance — you know, the Gulf cartel was once one of the most powerful crime groups in Mexico, and now it’s just a collection of gangs operating in Tamaulipas state. What that means is that we’re going to see them resort to increasing with kidnapping and extortion, you know, things that they — because they can no longer make the enormous profits from drug trafficking. Collectively, you know, it got split up. We’re going to see them go towards these crimes. But at the same time, security forces have an advantage now because they’re easier targets to pursue.

Scott: Thank you, Tristan. That means really that we’re going to continue to see security issues and problems in Mexico for the foreseeable future. For more about security in Mexico, please see our Mexican Security Monitor product and the rest of the coverage that we have at Stratfor about crime and security in Mexico.

“Conversation: Reassessing Organized Crime in Mexico” is republished with permission of Stratfor.