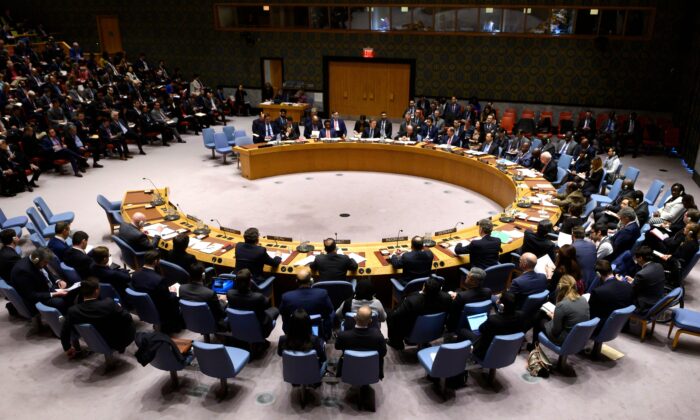 In a speech that criticized his successors, former prime minister Brian Mulroney called on Canada to beef up its place and spending in the world. He wants more foreign spending and a U.N. Security Council seat for Canada. Such remarks were music to the ears of the United Nations Association in Canada audience gathered in Toronto last week to hear him.

Even so, fiscal conservatives and skeptics of multilateralism have ample cause to tune out Mulroney’s suggestions.

Target number one was former Conservative prime minister Stephen Harper. Canada had succeeded in getting a U.N. Security Council seat six times before failing in a bid in 2010 under Harper. “(It) is not, as this embarrassing rejection was characterized by the then-government of Canada, ‘a badge of honour,’” Mulroney said.

Actually, it is Mulroney who is doing the mischaracterizing here. It was not the government, but columnists, who bestowed the “badge of honour” for this rejection. And they did so for reasons that are still relevant.

In his Oct. 15, 2010, column for Maclean’s titled “A diplomatic game worth losing,” Andrew Coyne wrote: “Most of the regimes to which Canada submitted itself for election have never themselves been elected to anything, a motley collection of tyrannies and kleptocracies” that put human rights abusers such as Libya on the council and spent most of their time making declarations against Israel.

Coyne concluded, “According to former U.N. ambassador Paul Heinbecker, Canada’s current ‘pro-Israel’ stance probably cost us votes among the U.N.’s 57 Arab and Muslim members … if so we should wear our defeat like a badge of honour.” That was a sizeable chunk of the 192 member states at the time.

Days later, the Wall Street Journal ran an editorial titled “Bravo, Canada” and subtitled “A U.N. snub is a badge of honor.” It took the position that Canada was far from an embarrassing failure, but actually had a laudable commitment by its long-term deployment in Afghanistan. “Canada seems to have annoyed a sufficient number of Third World dictators and liberally pious Westerners to come up short in a secret General Assembly ballot,” it said.

The Conservative government only mirrored these comments in a fundraising letter, adding, “Our government makes foreign policy decisions based on what’s right, not what’s popular. We will continue to do so.” When the Harper government fell in 2015, columnist Michael Rubin said, “The real void left by Harper’s exit, however, will be on the world stage.”

Rubin touted Harper as a voice of “moral clarity,” and added, “Harper could always be counted on to condemn rather than seek to appease terror in the Middle East, stand up for dissidents, and speak forthrightly on liberty.”

Does More Aid Equate to Vote-Buying?

The Harper government decided to spread Canada’s foreign aid dollars in more intentional ways instead of throwing money in all directions. The maternal health initiative helped women’s health but without funding abortion. By contrast, Canada is currently earmarking $400 million annually to groups that provide abortion abroad and plans to amp that to $700 million annually in the fourth year of this mandate.

Mulroney ignores these nuances and simply makes increased foreign spending proxy for doing the right thing. In the 1960s, Liberal Prime Minister Lester Pearson called for 0.07 percent of GDP to be spent on foreign aid. Pearson never did it, however. Mulroney said his government got closer at 0.05, but it has fallen to 0.26 percent since. “If we want to dress the rhetorical ‘Canada is back’ up in appropriate clothing, we must begin by gaining the respect of allies by paying our own way,” he said, quoting Trudeau.

A foreign aid onesie made of Canadian hundred-dollar bills was not part of current Conservative Leader Andrew Scheer’s election platform. He called for a one-quarter drop from current levels of foreign aid. Mulroney called the current levels “anemic and embarrassing,” let alone lower ones.

Does more aid to more nations mean more votes for a seat at the council? If so, it represents a vote-buying more senseless than usual. Vote-buying in domestic elections still means at least some segment of voters gets their self-interest met. With foreign aid, that definitely doesn’t happen—at least not directly. The ostensible beneficiaries are the foreign poor, but too often it is also the dictators, their armies, and NGO staff who benefit.

Oh, and let’s not forget endless government types abroad getting schmoozed for their vote. Australia spent $25 million lobbying and schmoozing their way to a temporary seat in 2012. In Canada, at least 10 people have been working full-time on the project.

Meanwhile, it’s hard to get a job at the U.N. itself. Last January, the body announced a 2 $billion shortfall in its peacekeeping operations. In October, the U.N. announced it barely had enough money to pay its staff, and would leave some positions vacant. But that’s peanuts compared to the nearly $700 billion in federal debt in Canada itself, not to mention Ontario’s $354 billion shortfall—the highest of any state or province anywhere. One may reasonably ponder whether the potential volatility created by debt enslavement threatens world peace more than anemic funding for the United Nations.

And what will the Security Council really accomplish anyway, whether Canada gets a seat on it or not? In its history of almost 75 years, the Council showed solidarity for the 1991 invasion of Iraq and little else.

The powerful are always jostling for more power, and taxpayers are not among them. The United Nations wants more money, but people want to keep the money they earned. Until governments respect citizens by keeping budgets in the black, taxpayers will bristle at sending more money abroad.