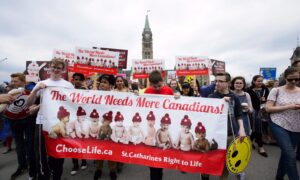 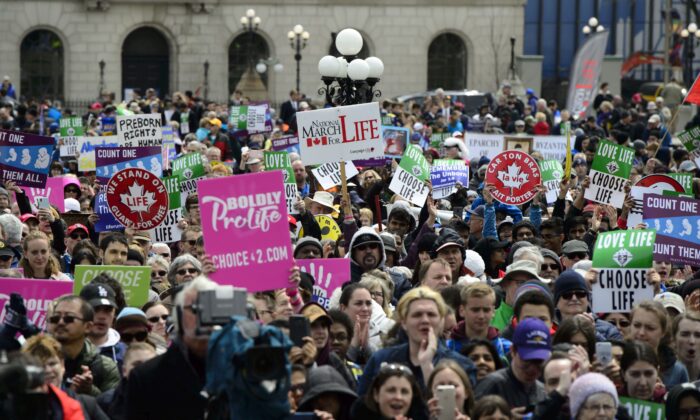 Thousands take part in the March For Life rally on Parliament Hill in Ottawa on May 9, 2019. (The Canadian Press/Sean Kilpatrick)
Viewpoints

With Amy Coney Barrett’s Supreme Court confirmation melodrama now ongoing south of the border, the argument about abortion has once again taken centre stage (assuming, that is, that abortion is still a subject deemed arguable by progressives, and that, in any case, it is possible to argue about euphemisms).

In no other department of progressive politics has language become more corrupted by Orwellian inversions of meaning than abortion. Almost 50 years after Roe v. Wade, the propagandists of abortion continue to refer to it as a matter of “reproductive health,” as if pregnancy were a disease, and as if an intervention whose very raison d’être is to render the natural reproductive process irrevocably morbid can be described as “healthy.” Abortion is related to reproductive health more or less as decapitation is related to mental health.

While watching Fox News recently, I switched (during a commercial break) to CNN to hear a female commentator inveighing against an “alien invasion” and “illegal occupation” of her “sovereign territory.” What? A Trump supporter on the Clinton News Network? Pondering this miracle in the spirit of liberal tolerance and compassion, I thought that, just perhaps, I should give CNN another chance.

But the commentator wasn’t talking about Mexican and South American criminal youth gangs violating America’s southern border, or Seattle’s former Antifa autonomous zone, as I soon discovered; she was characterizing the existential status of a baby in its mother’s womb. No compassionate appeal for intrauterine sanctuary cities here. And no “racism” or “xenophobia” either, of course.

The Baby as a Maternal ‘Part’

One has to be grateful to our CNN commentator for recognizing that, as an “alien invader” of female “sovereignty,” the pre-born child can only be a distinct and autonomous person. However lacking in “compassion”—the supreme virtue and unique prerogative of progressives—the alien-invader argument at least puts the lie to that other sophistical relic according to which the fetus is merely a lump of maternal “tissue,” a “mass of protoplasm,” an integral “part” of a woman’s body to be cut out and disposed of at her caprice. (A woman can hardly be “invaded” or “occupied” by a subhuman, impersonal mass that is already a constituent part of her body, can she?)

As the party of science, the progressive apologists for abortion seem strangely averse to the fact that the science has been settled (to use another progressive buzzword) on this question for decades: the fetus has its own unique human biological and genetic code—different, that is, from that of the host “tissue” it has “invaded” and “occupied.” Conversely, every other part of the mother is biologically and genetically identical to the maternal “whole.”

Of course, one need hardly be current with the cutting-edge discoveries of modern genetic science for ratification of the fact that the baby in utero is not an undifferentiated content of the maternal body, but a separate and autonomous human being with its own personality and conscious volition. Ordinary people have understood this intuitively, and for the same reason, philosophers and theologians have never (until very recently) felt obliged to demonstrate what everyone has recognized as self-evident. But post-modernist “progress” is all about regressing to the primordial ignorance in which our species first languished, before its long ascent through experience to knowledge: the accumulated detritus of bourgeois morality that has now to be cleared away for the revolutionary/utopian project to proceed. Like God in principio, today’s progressives assert the privilege of naming the phenomena of their New Creation.

In Canada, no one is more intellectually confused on this abstruse ontological question than the state, our official guarantor and sponsor of women’s (personkind’s?) “reproductive health.” On bottles of booze and packs of cigarettes, Health Canada gravely warns that “use during pregnancy reduces the growth of babies … these smaller babies may not catch up in growth after birth, and the risks of infant illness, disability, and death are increased.” That’s “babies”—twice in two sentences, in case you missed it. Not even our federal government, whose sacred charter supposedly enshrines abortion as an inalienable human right (according, at least, to our current son of Moses) defines the fetus as a female “part.”

Relatedly, one notes that doctors are enjoined by Canadian law to do everything in their power to save the life of the pre-born child even after its mother may have died (from criminal violence or medical complications). Why bother to save a “part” of the mother if the mother herself is already dead? Of course, no doctor would feel legally (or morally) bound to preserve the life of any other maternal “part” (a lung or liver, say), after the “whole’s” decease. Why, then, discriminate so heroically in favour of an impersonal mass of female protoplasm?

The reason should be obvious to anyone who occupies a rank on the chain of being above the merely photosensitive (including the proponents of abortion, one suspects): the pre-born child is rather more than a “part” of the woman’s body; or if it is, it is a “part” like none other. No other part of the mother can survive her death—or even removal from her living person—let alone go on to grow, develop, and prosecute a conscious, fully human life.

One dare not hope that the evangelists of this high sacrament of the Church of Progress might someday confess that abortion is the killing of a human being, even if Aristotle himself descended from the logicians’ heaven and appeared before them to demonstrate it in a syllogism. Abortion is the umbilical cord through which progressives draw all their fanatical energy, ideological certitude, and moral prestige. But for its own sake, truth needs to be reaffirmed, lest, along with the pre-born child, it become a collateral victim of the abortion holocaust.