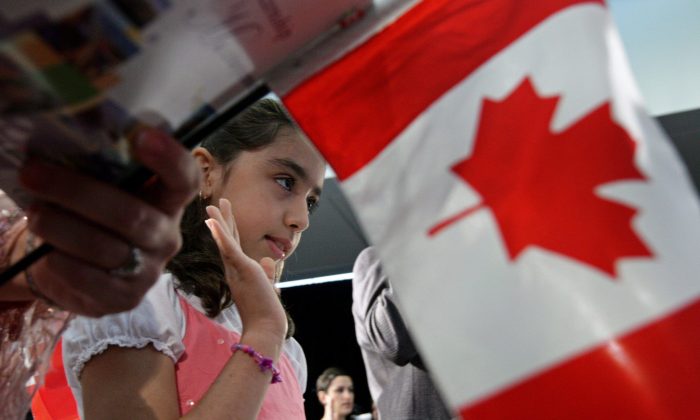 Iranian-born Negar Fakhraee, 8, takes the oath to become a Canadian citizen during a citizenship ceremony in Vancouver, B.C., on July 13, 2009. Prior research indicates that immunization rates in immigrant communities are lower than the majority of other Canadians, and a new study has found that it may be due to ineffective communication. (The Canadian Press/Darryl Dyck)
Canada

Reason for Lower Vaccination Among Immigrants? It’s Not Distrust

Stephanie Kowal, a researcher at the University of Alberta, thought lower immunization rates in immigrant communities might be due to distrust or conspiracy theories, such as the notion that vaccines cause autism in children.

But upon conducting a study that included new immigrant mothers living in Edmonton, she discovered that the reason is much simpler: ineffective communication.

“What we found in talking to mothers, in choosing to vaccinate, across the board they were happy to get a vaccination if they knew they could and how to do it. There was no distrust in the healthcare system or in vaccine safety,” says Kowal, a researcher with the School of Public Health at the University of Alberta.

Prior research indicates that immunization rates in immigrant communities are lower than the majority of other Canadians.

“Language is an issue—it is always an issue—but what we learned is that it is more fundamentally an issue of access to healthcare information. Mothers were receiving information only from healthcare workers, either at prenatal visits or during visits with their doctor afterwards,” Kowal explains.

She adds that in today’s healthcare system, with more focus on individual health management, this poses a problem.

The study, which was published in the Canadian Journal of Public Health, came about as a result of low turnouts among immigrant communities in Alberta for the H1N1 vaccination from 2009-2010, in particular.

It was based on 23 interviews between 2011 and 2013 with Edmonton immigrant mothers from South Asian and Chinese communities, as well as a group of Bhutanese refugees, who had one child under the age of 8.

“None of the women in our study had recalled hearing about the H1N1 vaccination,” says Kowal. “In talking with immigrant health-providing groups we decided to expand to all childhood vaccinations.”

Immigrants in Canada number 6.8 million, representing approximately 20.6 percent of the Canadian population. Canada has the highest portion of immigrants among the G7 countries.

“The information and decision-making process do not differ based on the type of vaccine, but they need to receive the recommendation to get vaccinated,” says Kowal.

In choosing to vaccinate, across the board they were happy to get a vaccination if they knew they could and how to do it.
— Stephanie Kowal, University of Alberta

Results from the Childhood National Immunization Coverage Survey released over the summer showed the perception of vaccines among Canadians. A majority of parents (95 percent) thought childhood vaccines were safe, although 70 percent expressed concern about the side-effects of vaccines.