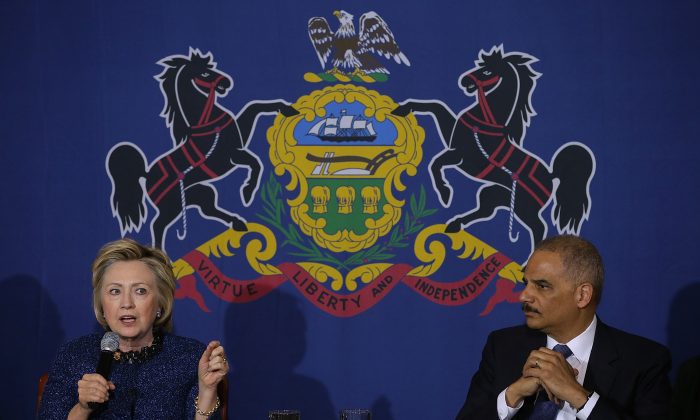 Reap What You Sow

Following the arrest of Cesar Sayoc as the primary suspect in the mailing of bomb-like devices to public figures, coverage on the Oct. 26 edition of the PBS NewsHour echoed many in the mainstream media by characterizing the episode as targeting “critics of President Trump.”

But President Donald Trump has many critics. What distinguishes those who received the mailings from his other critics? Might it be their own advocacy of confrontation as a substitute for discourse?

Recent public statements by influential public figures, all Democratic Party officials, have advocated the use of aggression towards those holding conflicting ideological views. Former Attorney General Eric Holder—once the United States’ top law-enforcement official—recently proclaimed at a campaign event, “Michelle [Obama] always says, you know, ‘When they go low, we go high.’ No. When they go low, we kick them. That’s what this new Democratic Party is about.”

Surprised by the vociferous public reaction, he tweeted his own form of humble apology: “OK, stop the fake outrage, I’m obviously not advocating violence.” Obviously? Taken in context with the statements of his fellow activists, the sincerity of his petulant, half-hearted “retraction” is questionable.

Holder’s statement came close on the heels of Hillary Clinton’s similar statement on CNN on Oct. 9: “You cannot be civil with a political party that wants to destroy what you stand for, what you care about. That’s why I believe, if we are fortunate enough to win back the House and/or the Senate, that’s when civility can start again. But until then, the only thing that the Republicans seem to recognize and respect is strength.”

Holder’s and Clinton’s inflammatory rhetoric follow a common thread. As quoted by Time magazine on June 25, Rep. Maxine Waters (D-Calif.) addressed a crowd of supporters in California: “Let’s make sure we show up wherever we have to show up. And if you see anybody from that Cabinet in a restaurant, in a department store, at a gasoline station, you get out and you create a crowd, and you push back on them, and you tell them they’re not welcome anymore, anywhere.”

Waters’s, Clinton’s, and Holder’s anti-democratic sentiments—the list of names and supporting quotes could go on—intensify the current atmosphere, promoting substitution of abrasive confrontation as a replacement for civil discourse.

Yet two weeks ago, columnists Mark Shields and David Brooks spoke at length during their regular segment on the PBS NewsHour about the lack of civility emanating from the White House. They commented on the president’s degrading of the culture of civil communication. Not a word, mind you, from either of them on the outrageous calls to confrontation from the president’s ardent and inflammatory opposition.

Concerning Sayoc, is it ironic that the most vocal advocates of the use of confrontation were the intended recipients of the madman’s terrorist actions? And doesn’t Democratic donor Tom Steyer, also an intended recipient, see the irony in his words, when he speaks of Trump as having created an atmosphere not merely conducive to violence, but provoking violence. This after a continued barrage from the mainstream wing of the Democrat Party of not merely creating “an atmosphere,” as Trump is accused of doing, but actually, literally, inciting and encouraging violent confrontation.

Perhaps Sayoc was taking his cue from Holder, Clinton, Waters, and company, redirecting the hostilities back toward those who had advocated hostility.

He chose to terrorize them—a true terrorist—rather than harm them physically. The devices were, it seems, free of gunpowder. A review of the criminal complaint filed in federal court on Oct. 26 refers to the devices as IEDs (improvised explosive devices), and describes the components, but is surprisingly vague in identifying the nature of any chemicals or substances capable of exploding.

Underscoring the drastic shift in the Democratic Party over the past few decades, a recent essay by Sam Roberts in The New York Times analyzes a new documentary film on former Sen. Daniel Patrick Moynihan (D-N.Y.). Roberts misses the essential points when commenting on how the late senator would have reacted to the hostile political environment we find ourselves in.

Roberts refers to Moynihan as the anti-Trump of American politics (imputing the philosophy of his employer onto the late senator). But Moynihan had great respect for the office of the president, and he served under both Democratic and Republican heads of state. While the erudite and cultivated senator would no doubt have shown disdain for the somewhat coarse, unpolished Trump, his dissent would have been civil, however acerbic.

And he would have, characteristically for him, searched and reached compromise. I know of what I speak, because I worked for Moynihan both as an advance man in his first campaign and as a legislative research assistant in the Senate (along with office-mates Tim Russert, late of “Meet the Press,” and Elliott Abrams, a future assistant Secretary of State).

Moynihan would have been horrified by the incendiary rhetoric of members of the party to which he had been an icon, the Democratic Party not of Hillary Clinton, not of Maxine Waters and company, but rather of Scoop Jackson and the moderate wing of the party. But that’s now defunct, its essential principles having a hawkish (by today’s standards) foreign policy and a progressive domestic policy, liberal in its support for a well-administered social network providing aid for those truly in need, policies that have been rendered either obsolete or absorbed by the more moderate wing of the Republican Party.