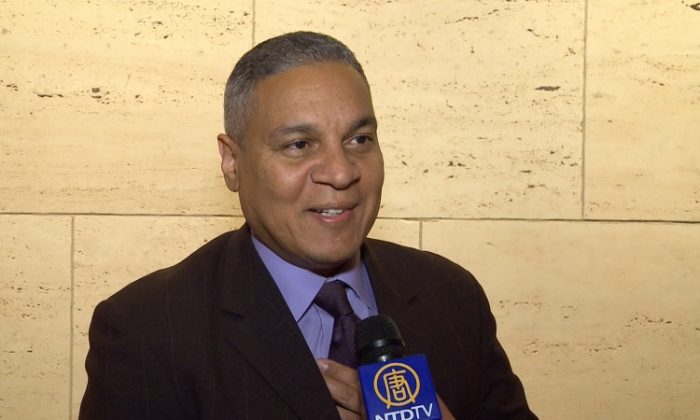 “They definitely resonate with my own upbringing, [with] the core values of honesty, of friendliness, of good virtues,” said Mr. Rodriguez.

Shen Yun revives 5,000 years of Chinese culture held to be divinely inspired. The artistic forms are inseparable from the Buddhist, Daoist, and Confucian principals that shaped them, according to explanations given on Shen Yun’s website.

Mr. Rodriguez said the performance was “fulfilling to my heart.”

The final song by soprano Haolan Geng, titled “Speaking of Predestination,” touched him.

“It really brought tears to my eyes. I don’t remember the words, the translation, but the music combined with the words that I read were very stirring to me,” said Mr. Rodriguez, mentioning the way the Chinese lyrics were translated on the backdrop. “I highly recommend it,” he said. “[It is] spiritually very fulfilling.”

Also in the audience on Wednesday evening was Linda Stillwell, a senior vice-president of Corcoran Group.

“It’s absolutely amazing. The combination of dance … and the graphics, as well as the orchestra, is truly pleasurable,” she said.

Ms. Stillwell was impressed with the dance Lotus Leaves and the fan work in the piece.

“Behind the leaf of every lily pad lies a blossom waiting to bloom,” describes Shen Yun’s program. “Delicate yet playful, these lotus maidens are at their ease when dancing atop the waters. The dancers’ unique full-circle fans sway like lily pads in the wind, evoking scenes of a flowering lotus garden in the summertime.”

The diversity of the dances was welcomed by Ms. Stillwell.

“Every number is different,” she said. “Some are warm and fuzzy, some are so exciting—you really want to dance with them.”