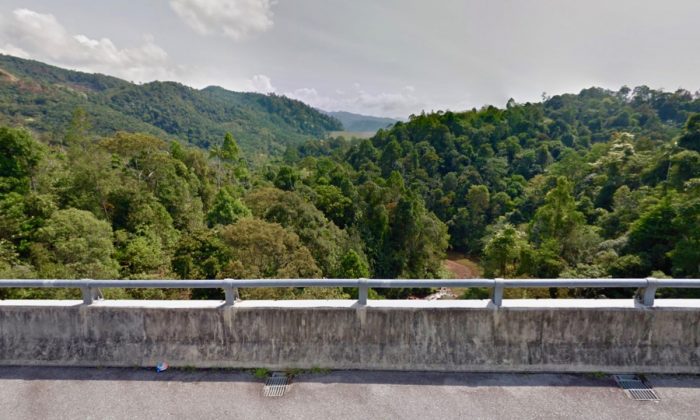 A Malaysian reality TV star fell backward off a bridge in bungee jumping gear while embracing his 2-year-old daughter.

The video, posted to Instagram, has received a lot of criticism in regard to the safety of the child, who appears to wear either no or minimal safety gear. Most noticeable is that she isn’t wearing a helmet. Reality TV star Redha Rozlan is wearing a helmet and appears safely harnessed to the bungee cord. His daughter’s life seems reliant only on the grip of his hug as they drop almost 200 feet. Subsequent posts show that she does have a harness on.

He tried to calm people who viewed the video on Instagram by letting them know that his daughter Mecca is “wearing complete safety harness and gear,” that the bungee jumping organization is certified, and also wrote, “Dont try with your kids if your kids not ready for this.”

Every girl may not be queen to her husband, but she is always a princess to her father.. A daughter's first love, a son's first superhero. @matredho ➖ #visithuluselangor #rentasropeswing #outdoortothemax #rentas_adventures ➖ Btw, slot minggu depan available lagi. Call/whatsapp 0142650526 for more info!

Rentas Adventures, the organization hosting the bungee jump, posted the video along with the caption, “Every girl may not be queen to her husband, but she is always a princess to her father. A daughter’s first love, a son’s first superhero.”

“In America, we lock parents up if they leave the kids in the car alone. I can only imagine what we would do to this animal,” commented iamahmadrabah, on the video post.

“Whiplash, shaken baby syndrome, lung collapse, emotional distress and so many other things can occur AFTER this selfish, ridiculous act. Makes me so angry that this dad thought this was somehow ok. Sickening. Absolutely irresponsible, selfish, abusive and in no way right. Awful,” commented djstacystylez.

She request to get jump again.. Homann im so proud of you @mecca_medin . . Anyway @rentas_adventures perfectly do their "safety check"

But some held other views.

“Good for this father teaching his daughter to be fearless from such a young age. Realistically any amount of jerking would have been taken by the father only. So many crybabies today! Oh and for those complaining about a helmet. Question do you think for one second, god forbid, but in the event of a freak accident that a helmet would do anything?” commented papapelto.