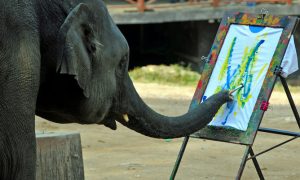 The trainer teaches rescue dogs to beg, bark and bow or sit, stand and shake for movies, TV and the Broadway stage. Once the animal actors retire, he brings them home to join his 30 dogs, one cat, farm animals and singing macaw that swears like a sailor.

He is bringing the motley crew to reality TV in “From Wags to Riches with Bill Berloni,” the Discovery Family Channel’s first original series, debuting next week.

Berloni, 58, who was recognized by the Tony Awards for excellence in the theater, has been approached about a reality series before. He says he gave this one the green light because “there aren’t many shows about good people doing good things.”

Some animal-welfare groups denounce animals in entertainment, but Berloni believes dogs were made for show business. He says he would never train a wild animal, but he does transform rough-and-tumble pooches into top actors.

He rescued a Chihuahua named Chico, who went on to play Bruiser in “Legally Blonde: The Musical,” when he was prone to biting and about to be euthanized at the pound. Berloni worked with Chico until he could bark on cue and run into his carrier whenever an actress says, “White shoes after Labor Day.”

Now, the tiny pooch that sleeps in the crook of his arm.

“Chico lives for me, and you can’t help but respond to that. It is a huge responsibility,” the self-taught trainer said.

Dogs are hardest to train for the stage, Berloni said. Unlike TV and film, there is no editing button, and it’s impossible to mask distractions from audiences and actors.

The dog he trained to play Sandy in the original stage production of “Annie” in 1977 eyeballed the audience as theatergoers in the front row were munching on fried chicken. But Sandy didn’t leave the stage, Berloni said.

“Annie” was a huge hit, and Sandy became the longest-running dog actor on Broadway — she didn’t miss a performance in seven years.

Sandy gave Berloni his start training celebrity dogs. He was working at an opera house in Connecticut, where he and his family live on a farm in Higganum, when a producer asked him to find and train the dog for “Annie.”

Things are a bit less glamorous on the reality show, which is wrapping up its first four episodes.

At home, Berloni’s salty macaw rules the roost. The bird named Kevin turns the kitchen sink into his stage, belting out tunes such as “Tomorrow” and “It’s Raining Men.” Despite his outrageous personality, Kevin has never acted, unlike his fellow pets.

“He is only a star in our living room,” Berloni said.

Co-executive producer Sarah T. Davies says the show stands out for its simple moments: A group of dogs playing in the snow; a massive St. Bernard getting a bath; his wife and daughter competing to bake the best dog biscuits.

“I do regard him as a real-life Dr. Doolittle,” Davies said.

Berloni says he’s focused on improving animals’ lives rather than the camera crews, but fame is nothing new. He had to confront it even at his daughter’s preschool about a decade ago.

“They called us in and said our daughter had a vivid imagination. They said she told them I was at ‘Sesame Street’ playing with Elmo. I told them I was,” Berloni said.