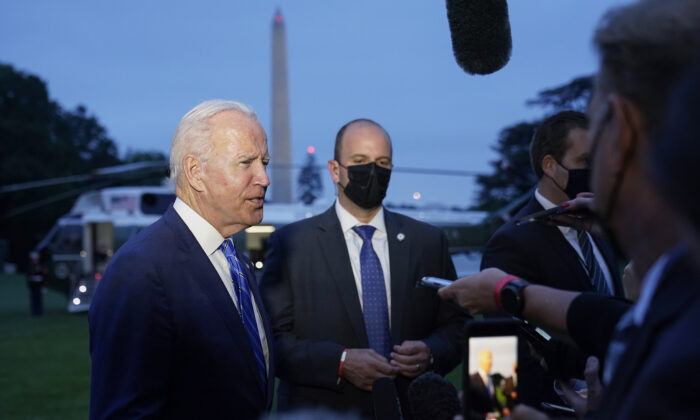 President Joe Biden talks with reporters after returning to the White House in Washington on Oct. 5, 2021. (Susan Walsh/AP Photo)
Democrats

Democrats in the Senate may very well end up applying the nuclear option to the filibuster in order to raise the debt ceiling, according to President Joe Biden.

“I think that’s a real possibility,” the president told reporters after arriving back in Washington on Tuesday from a trip to Michigan.

The Senate started debating at 10 a.m. Wednesday a bill the House of Representatives passed that would suspend the debt ceiling until next year. The Senate planned to hold a procedural vote that would advance the bill in the afternoon but requires 60 votes if Republicans filibuster it, as they plan on doing.

With virtually no Republican support for the bill, Democrats are faced with few options. Top Democrats, including Biden, argue that folding a debt limit suspension into a process called budget reconciliation would take too much time—the United States faces not being able to pay all of its bills on Oct. 18—even as Senate Minority Leader Mitch McConnell (R-Ky.) urges them to do so.

That leaves convincing Republicans not to use the filibuster on the House bill or employing the nuclear option.

The term refers to when the Senate decides to alter voting rules. A simple majority can approve a change. It’s been used twice in recent years—once by Democrats and once by Republicans.

By employing the option, Senate Democrats can lower the voting threshold from 60 to a simple majority. The party controls the 50–50 Senate through Vice President Kamala Harris, who as president of the upper chamber can cast tiebreaking votes.

Sens. Mark Warner (D-Va.) and Gary Peters (D-Mich.), among others, have expressed openness to nuking the filibuster for the debt limit. Others have said they would support the move, including Sens. Jeff Merkley (D-Ore.) and Tina Smith (D-Minn.).

“There’s not many options if they’re going to be that irresponsible,” Biden said, referring to Republican plans to block the House bill.

Top GOP members say Democrats have pursued their agenda on a partisan basis, pointing to the blocking of a bipartisan infrastructure bill in the House at the behest of so-called progressives, and are trying to spend too much. Democrats, they say, are free to deal with the debt ceiling on their own. And they note they’ve expressed their opposition for months, which gave Democrats enough time to utilize reconciliation.

“Democrats have had two and a half months notice to use the fast-track, party-line reconciliation process, which they have already used happily this year and already intend to use once again. But the Democrats who run Washington have done nothing. They squandered week after week after week,” McConnell said on the Senate floor on Wednesday. “Even now, while the Democratic leader complains that he’s short on time, he continues to waste time with partisan stunts that are dead on arrival. He scheduled yet another vote this afternoon, which he knows will fail.”

“If Democrats want to spend trillions of dollars to execute their socialist agenda, they need to pay for it themselves. I cannot and will not support raising the debt limit to pay for their purely partisan wish lists,” Sen. Jim Inhofe (R-Okla.) added on social media.

Nuking the filibuster may prove difficult. Sens. Kyrsten Sinema (D-Ariz.) and Joe Manchin (D-W.Va.) have long rebuffed plans to alter or remove it.

Sinema’s office did not immediately respond to a request for comment. Pressed on his position on Tuesday, Manchin told reporters, “I’m not going to say anything about it.” He said Senate leaders should reach an agreement.

Biden spoke ahead of an Oct. 6 meeting with business executives. They planned “to discuss the urgent need for Congress to take immediate bipartisan action to address the debt limit and avoid default on the U.S. government’s financial obligations and the economic catastrophe that would follow,” according to a White House statement.

Editor’s Note: This article has been updated with additional details.