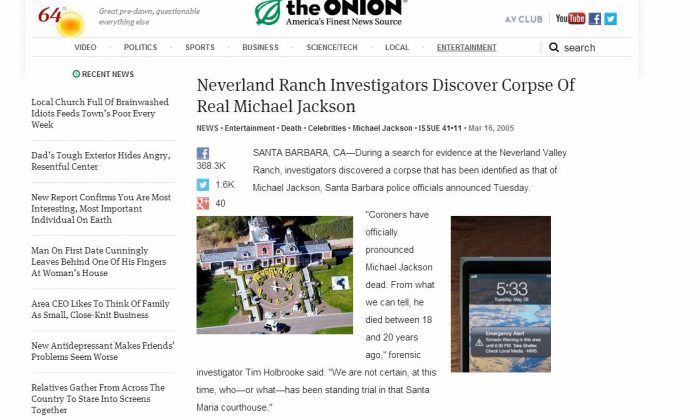 Michael Jackson Corpse-Fake Body Article is ‘Onion’ Satire; Many Thought it was Real

Numerous social media users believed a Onion satire article from 2005 saying that Michael Jackson’s real body was found buried on his Neverland Ranch and there’s was an impostor claiming to be him.

The Onion article says that Jackson died between 18 and 20 years ago.

“Jackson’s corpse was buried just inches below a stretch of the miniature-train tracks that run throughout Neverland. The largely desiccated corpse wore the remains of a red, zipper-covered leather jacket and a single glove,” the satire reads.

The Onion is a satire publication. According to its disclaimer, it says it “uses invented names in all its stories, except in cases where public figures are being satirized. Any other use of real names is accidental and coincidental.”

But on Facebook and Twitter, a large number of users thought the article was real, even though the Onion writers placed highly unrealistic and supernatural elements inside.

“While their claims have not been corroborated, other Neverland visitors have reported that when Jackson entered a room, lights flickered, faucets ran blood-red, and screams escaped from the walls,” the Onion article reads.

The article has more than 500,000 “likes” and shares on Facebook–most of which came within the past week.

“Michael Jackson Was Dead Before He Did That Record Bad !!” wrote a Twitter user this week, linking to the Onion piece. “The Jackson That Been Running Along is Fake!”

Added another: “The real Michael Jackson has been found.”