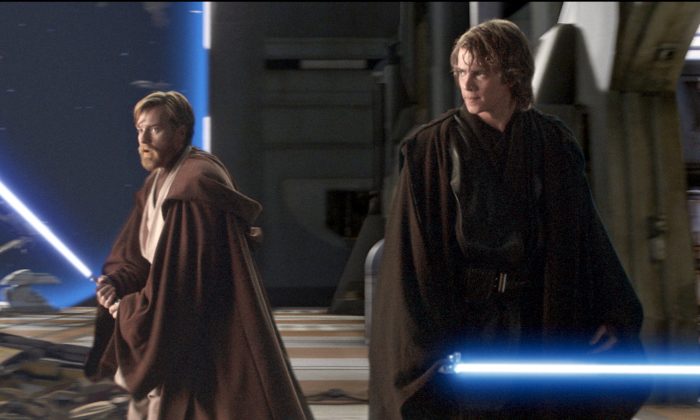 Scientists have found a way to bind together photons that creates a sort of real-life lightsabers, they say.

A group of scientists figured out how to coax photons into binding together to form molecules, “a state of matter that, until recently, had been purely theoretical,” according to a press release.

“Photonic molecules” behave less like traditional lasers—which pass through each other—and much more like the light saber.

“It’s not an inapt analogy to compare this to light sabers,” Harvard Professor of Physics Mikhail Lukin said in the announcement. “When these photons interact with each other, they’re pushing against and deflect each other. The physics of what’s happening in these molecules is similar to what we see in the movies.”

Ribidium atoms were pumped into a vacuum chamber, then lasers were used to cool to cloud of atoms to just a few degrees above absolute zero, according to the Harvard Gazette.

Lukin said that as the photons enter the cloud, their energy excites atoms along the path, causing photons to slow dramatically.

As the photons move through the cloud, the energy is handed off to each atom, moving along, until it exits the cloud with the photon.

Then, two photons were fired into the cloud, and they ended up pushing and pulling each other through the cloud.

“It’s a photonic interaction that’s mediated by the atomic interaction,” Lukin said. “That makes these two photons behave like a molecule, and when they exit the medium they’re much more likely to do so together than as single photons.”

“We do this for fun, and because we’re pushing the frontiers of science,” Lukin said. “But it feeds into the bigger picture of what we’re doing because photons remain the best possible means to carry quantum information. The handicap, though, has been that photons don’t interact with each other.”

Lukin said that the system could be used one day to create complex 3-D structures entirely out of light.

“What it will be useful for we don’t know yet, but it’s a new state of matter, so we are hopeful that new applications may emerge as we continue to investigate these photonic molecules’ properties,” he said.

The work was published in the journal Nature.