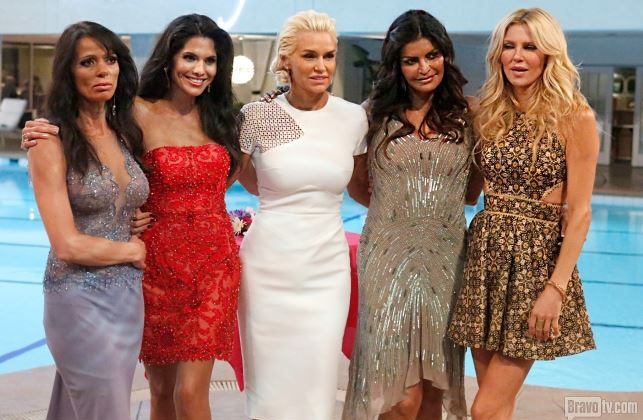 Real Housewives of Beverly Hills Season 4 Not Quite Over; Reunion Episodes Still to Air

That would be part 1, 2, and 3 of the reunion, as well as an episode titled “secrets revealed.”

These episodes will run the next four weeks beginning on March 17 at the usual Monday 9 p.m. time slot.

Host Andy Cohen will take a look at the must-see moments from season 4, while “Kyle Richards, Lisa Vanderpump, Brandi Glanville, Kim Richards, Joyce Giraud de Ohoven and Carlton Gebbia head to the couches to reflect on this season’s defining moments and to draw lines in the sand concerning the future of their friendships,” the official description says.

“The gripping, three-part Beverly Hills reunion begins Monday, March 17 at 9 PM, as Andy Cohen questions the women about the dramatic twists and turns of season four. Joyce and Brandi prove that there is no love lost between them, and the women explore what happened when the “dream team” of Yolanda, Lisa and Brandi started to show its cracks. Then, things lighten up as Kim discusses her favorite season yet.

“During Part II, Monday, March 24 at 9 PM, the Beverly Hills housewives share laughter over their health and beauty regimens and also shed tears talking about their children who are growing up and leaving home. Brandi delves into the tough year she has had, while Kim doesn’t hide her conflicted feelings about Lisa. After some rough words, Kyle and Carlton determine that they will most likely never, ever be friends.

“On Part III airing Monday, March 31 at 9 PM, the dramatic Beverly Hills reunion continues, with Lisa in the hot seat as Yolanda, Brandi and Kyle all discuss the problems they’ve had with her while, at the same time, hope for some resolution. Then, the husbands join the fray and Ken tells an emotional Brandi that he may never be able to accept her back into his life. Or can he?”

The last episode, “Secrets Revealed,” features behind-the-scene moemnts from season 4. These include Kim teaching Brandi how to act in a TV movie, Lisa and Joyce bonding over a candid dinner with their husbands, and Kyle learning how to to be a TV presenter. The episode will air on April 7.