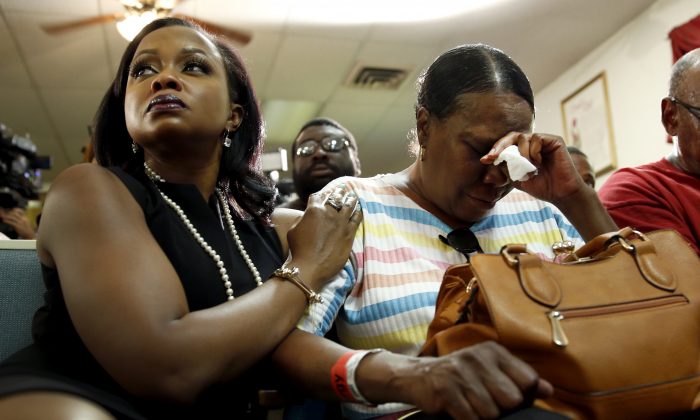 Phaedra Parks, left, comforts Desuirea Harris, the grandmother of Michael Brown, during a news conference Monday, Aug. 11, 2014, in Jennings, Mo. Michael Brown, 18, was shot and killed in a confrontation with police in the St. Louis suburb of Ferguson, Mo, on Saturday, Aug. 9, 2014.(AP Photo/Jeff Roberson)
Entertainment

Real Housewives of Atlanta star Apollo Nida reportedly picked a fight with wife Phaedra Parks in lieu of going to prison. Nida also gave an interview before he was incarcerated.

Nida eventually turned himself in–but he was late, according to reports.

Nida was convicted of bank fraud and identity theft and is set to do eight years behind bars.

“It was such a surprise, because he showed up while he was already supposed to be behind bars at a federal prison in Lexington, Kentucky,” a source told People magazine of the fight. “The police were called, but he left on his own. The whole incident was caught on camera.”

TMZ similarly reported that Nida was angry because Parks wouldn’t place money in his bank account before his sentence. “He would show up at her office screaming at her and demand money,” a source was quoted as saying. “Over the last two months, he’s dropped thousands of dollars at strip clubs, drinking, and partying – and spending virtually no time with his children.”

Forbes interviewed Nida, 35, before he went to prison.

“I have two major regrets. The first is not being true to myself. When I came out of prison the first time, I told myself that I never wanted to be in this situation again. I had numerous talks with myself. I knew how to stay out of trouble but I lost focus. I didn’t stay true and I found myself quickly caught up in the same lifestyle I left six years prior. When I came home from prison, I wanted to be different. I wanted to live an honest life. I really did. I should have stuck to my guns. My second regret is letting my boys down. Now, my kids are going to have Christmas without their dad because of my decisions. Although I let them down, I will never stop loving them,” he told Forbes.

The reports come as NeNe Leakes and Cynthia Bailey are still in a feud that started last season, according to rumors apparently started by Kenya Moore, reported WetPaint.