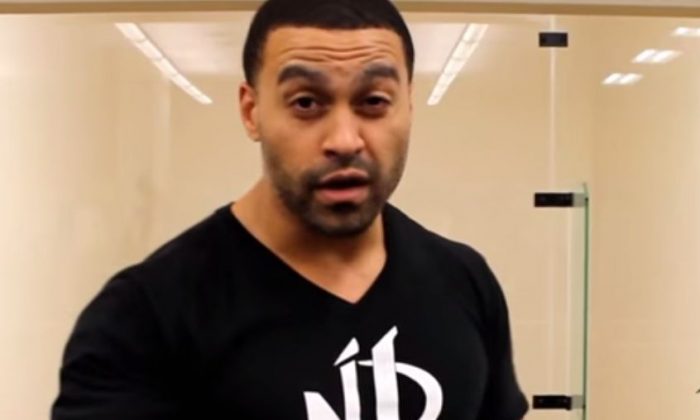 Real Housewives’ Apollo Nida has a ‘New Business’ in Prison

Set to do eight years behind bars, Apollo Nida of the “Real Housewives of Atlanta” is thinking of ways to keep himself busy.

Nida, who started his prison term earlier this year on a fraud conviction, started up a workout plan called Nida Fitness 4%, which according to RadarOnline.com, is “an inspirational program that attempts to motivate people to work out.”

The program talks getting one hour of exercise per day, which is about 4 percent (4.167 percent to be more exact) of a person’s day.

He also started a website, itsonly4perecent.com, which is selling USB wristbands.

It appears that Nida did the work for the business before he started his prison term. He also posted a video on YouTube to promote it.

His wife, “RHOA” star Phaedra Parks, is getting a divorce from him, according to reports a few weeks ago.

Nida’s two sons have also sent him drawings and have talked to him while he’s been behind bars. “Phaedra lets the boys talk with their father anytime and every time he calls; they last spoke as recently as yesterday,” Parks’ spokesman, Steve Honig, told RadarOnline a few days ago.

“Phaedra also has the boys write him letters and draw him pictures, which she sends to him,” Honig added. “She goes out of her way to enable the boys to communicate with their father, and anyone who says otherwise is lying.”

Meanwhile, Parks said a few weeks ago that she’s dealing with a lot.

“Words cannot express the turmoil this situation has caused our family, and I can’t even begin to articulate how hard it has been. When you face a situation like this, you can choose to either break down or stay strong; I chose to stay strong because I have two young children that need a parent to give them stability and keep the ship sailing,” she wrote on her Bravo page.

“I’ve been criticized for not being at Apollo’s hearing, but the truth is I had been there for him in so many ways for such a long time. By the time all of this went down, it was apparent the marriage was over and my focus needed to be exclusively on the wellbeing of our children. I don’t think there’s a parent out there who wouldn’t agree.”