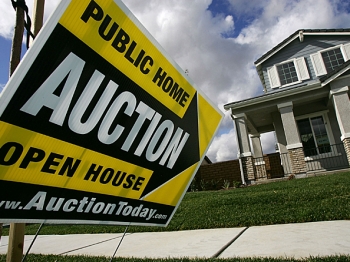 New houses are up for auction in Rancho Cucamonga, California, where a recent housing boom has been taking place January 28, 2008, after new-home sales tumbled to the lowest mark in 12 years during December and prices fell sharply. (David McNew/Getty Images)
Home

Lately, the national news has been reporting on irresponsible subprime lenders and the negative impact they have had on the U.S. housing market.

There have been many stories about the victims of such predatory lending practices—homeowners who can no longer make their payments—people whose only answer seems to be foreclosure or a possible short sale.

Recently, realtors and concerned members of the U.S. Government have sought to find solutions that can help turn the subprime crisis around.

On Dec. 14, the FHA Modernization Bill was passed by the U.S. Senate after Realtor members from Oklahoma and South Carolina impressed upon their senators the impact such a bill could have in providing safe loan products to the public and in preventing future foreclosures.

FHA is a loan program issued to potential homeowners by federally qualified lenders and insured by the Federal Housing Administration.

The president of the National Association of Realtors (NAR), Richard Gaylord, of Long Beach, Calif., explains: "FHA is positioned to help homeowners who face unaffordable mortgage payments as a result of resetting adjustable subprime loans and [to] help bring stability to local markets and economies."

As the Senate-passed bill differs significantly from a separate bill passed earlier this year by the House of Representatives, a committee including both House and Senate members will be appointed to reconcile such differences.

There is no timetable for the future assembly of the committee, but NAR has submitted letters to the House Committee on Financial Services and the Senate Committee on Banking, Housing, and Urban Affairs requesting a speedy reconciliation.

"FHA is an important component to helping people affected by the subprime crisis. A modernized FHA can offer safe alternatives to many American families looking to buy a home or refinance their current home out of an exotic loan," said Brian Montgomery, commissioner of the Federal Housing Administration.

The Senate bill aims to increase loan limits in areas of high-cost up to $417, 000, while the current limit of $362,000 is far below what borrowers need. Also, the minimum down payment needed would be reduced, and home owners in fear of defaulting on their mortgage payments could potentially refinance into an FHA-backed loan.

Other Changes in the FHA Bill

Other changes include increased penalties for fraud and strengthening the loss mitigation program.

Through the Debt Relief Act, those who have lost their homes due to a short sale, foreclosure, deed in lieu of a foreclosure, or similar situations will be relieved of the obligation to pay a portion of their debt—the bill guarantees that any debt forgiven on a mortgage acquired for a principal residence will not be taxed.

As a result, individuals with forgiven debt may find it easier to become homeowners again in the future.

The National Association of realtors said, "NAR has been advocating for such a change to the IRS tax code for nearly 10 years. We have always believed that it is clearly an issue of fairness and of not kicking people when they are down."

Author's note: A realtor is a real estate professional who is a member of the National Association of Realtors and who subscribes to its code of ethics.