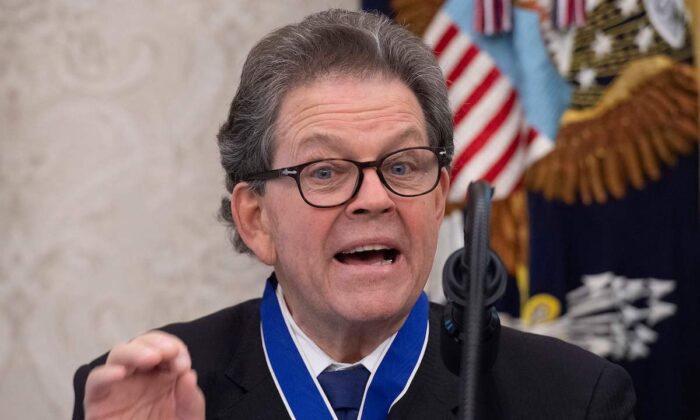 Arthur Laffer speaks after US President Donald Trump presented him with the Presidential Medal of Freedom at the White House in Washington on June 19, 2019. (Jim Watson/AFP via Getty Images)
Education

Two individuals were arrested Monday evening after a protest disrupted and ultimately shut down a Binghamton University lecture given by Arthur B. Laffer, a revered economist who was the recipient of the Presidential Medal of Freedom this June.

Dubbed “father of supply-side economics,” Laffer is America’s leading economist in favor of tax cuts and a free market. He served on Ronald Reagan’s economic policy advisory board throughout the 1980s. His scheduled lecture at BU, titled “Trump, Tariffs, Trade Wars,” was meant to offer insights on the Trump administration’s economic strategy.

According to a statement released by Brian Rose, BU’s vice president for Student Affairs, the university anticipated the event would draw protestors and took a number of measures in preparation of a likely disruption. The event was relocated to a larger lecture hall, with an abundant police force to maintain order. Protestors were allowed to hold their own speak-out in an adjacent lecture hall, and lecture attendees were asked to reserve their questions until the end of the presentation.

“Despite those measures, the lecture was immediately disrupted and the speaker was entirely prevented from addressing the audience led by an individual using a bull horn,” Rose said in the statement. “That individual was arrested, as was another individual who attempted to interfere with police.”

A video that captured the chaotic scene inside the lecture hall was posted to Twitter by New York’s Republican State Senator Fred Akshar, who was invited to speak at BU on Tuesday evening, but canceled the visit, saying “it’s become clear to me that Binghamton University’s campus has no longer become suitable for civic engagement.”

I’m disgusted by the chaos we’ve witnessed erupt across the @binghamtonu campus over the past several days. Our college campuses should be places where ideas and peaceful discourse can be shared freely by all individuals, no matter their differing politics or opinions. pic.twitter.com/75QENYMlRv

In the video, a male protester with a microphone can be heard declaring “we’re tired of being oppressed and we’re tired of getting murdered by this administration.” He moves on to call Arthur Laffer “a liar” for allegedly supporting incarceration, which the protester refers to as “the modern day slavery of our time.”

Seconds later, the protester was handed a bullhorn equipped with a bright flashlight that appeared to shine forward in the direction the bullhorn was pointed. When people moved to the front of the lecture hall in what appeared to be an attempt to shield the guest speaker from the beam of light, the protesters erupted in mocking laughter.

As police began to intervene, the protesters quickly formed a human wall to protect their bullhorn-wielding peer, while chanting “free speech, free speech.” The police managed to pull one protester off the top of a desk and took him away.

According to State Senator Akshar, Arthur Laffer was interrupted “seconds after he began speaking” and “had to be escorted out of the building for his safety.”

Meanwhile, local leftist advocacy group Progressive Leaders of Tomorrow (PLOT) wrote in a Facebook post Monday evening that its members “showed up to assist and help ensure the safety of Black students due to increased police presence,” calling what happened at BU “very successful action.”

“We support the actions and outrage of the students involved, and will be monitoring the University’s response closely,” PLOT said.

The university said it is investigating the individual students and student organizations who “encouraged or participated in any activity that violated applicable law and University policies.”

“The University is incredibly disappointed with the events that happened tonight, particularly given that demonstrators were provided an adjacent lecture hall to engage in a counter discussion,” Rose said. “The protesters chose instead to infringe on the expressive activity of others and to prevent those who wished to hear the speaker from doing so.”