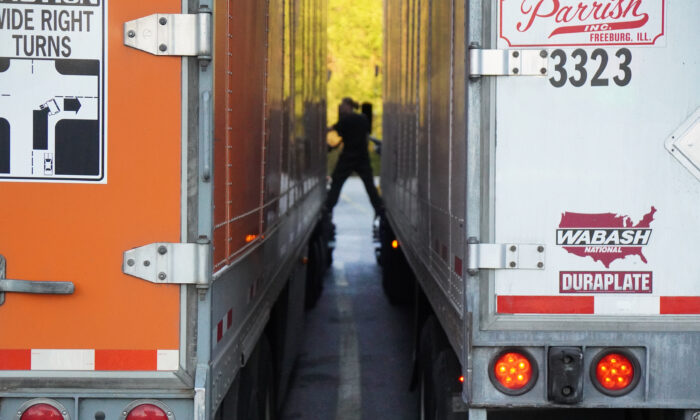 A female trucker stands between rigs while talking at the One9 truckstop in Wildwood, Georgia on Oct. 18, 2021. (Jackson Elliott/The Epoch Times)
Regional News

When The People’s Convoy starts moving from California to Washington D.C. on Feb. 23, participating truckers from other areas of the United States are expected to make their way to Washington and join them.

In Pennsylvania, multiple unrelated groups are cooperating to offer the convoy encouragement in a variety of ways, including providing food and offering moral support.

Similar to the Freedom Convoy in Canada, independent drivers of semi-tractor trailers will gather in Washington and demand President Joe Biden end the declaration (pdf) of the National Emergencies Act, which would end COVID-19 mandates and make it harder to bring them back in the event of a COVID-19 resurgence.

Privately driven cars, pickup trucks, and motorcycles are all welcome to join The People’s Convoy, organizers have said.

Although organizing groups in Pennsylvania do not yet know precisely when truckers will drive through their area, or what route the convoy will take, a groundswell of grassroots support has emerged through multiple social media channels.

And the support is more than just posting words; people are rolling up sleeves to participate.

Pennsylvanians Michelle Raymond and Andrew Walker are planning a convoy rally on March 5, starting at 11:30 a.m. from Main Street in Morgantown to the National Memorial Arch in Valley Forge National Historical Park, located just outside Philadelphia where they will gather, speak, and collect food donations for truckers involved in The People’s Convoy.

The U.S. Constitution was written and the Declaration of Independence was signed in Philadelphia. General George Washington and his soldiers nearly starved in Valley Forge, enduring the brutal winter of 1777–1778, during the Revolutionary War.

“Philadelphia, with the Liberty Bell, has always been the cradle of freedom, and Valley Forge is very symbolic of American freedom,” Raymond told The Epoch Times.

Walker has secured a permit from the National Park Service to gather there, and he informed police that their road rally is coming through.

“We let the police along the route know,” Walker told The Epoch Times. “Police have been supportive.” Their purpose is to bring patriotism and awareness, and to get like-minded people together and unite for the truckers, Walker said.

“This is a peaceful protest,” Walker stressed.

In 2020, Raymond and Walker organized many road rallies in support of the reelection of President Donald Trump. Based on early conformations, they expect this to be their largest rally yet, with hundreds driving along. Participants don’t need to sign up, and may simply join in anywhere along the route or meet at the arch.

A coordinator of the Facebook page “Freedom Convoy to DC-Valley Forge Area Logistics Support” is collecting large amounts of food donations and encouraging citizens to prepare to gather on overpasses with signs, and have children make cards for truckers. Locations of overpasses have not been specified because the route is unknown. The coordinator, who did not want her name used for fear of losing her job, said people need to be ready for whenever convoy participants come through.

The logistics page has posts organized by county, with local coordinators managing their areas. Volunteers are connecting under their county posts and offering to collect or provide drinks, food, pet food, and cleaning items that may be needed in a truck, plus storage and transportation.

Across the country in Maine, Vermont, New Hampshire, Massachusetts, New York, New Jersey, Ohio, and numerous other places, pages have been created with volunteers ready to participate in various way, but because many people had the same idea at the same time, no one is in charge and it is impossible for donors to know who to trust. Plans are being made and, based on photos, much food has been collected, but some logistical needs may not be evident until the convoy is moving.

These groups are not collecting money. They are directing all financial donations to the official The People’s Convoy website, which goes directly from donors to the organization. The People’s Convoy did not respond to requests for clarification about the local organizers who are unaffiliated with the convoy.

Supporters say they are eager to support the convoy’s goal.

“We are at to a point as a country—as a world right now—that we need to look at the bigger picture. We’ve let things slide too much,” Raymond said. “We usually stand for freedom first, and we couldn’t do it. We had to have Canada as the forerunner. Now we’re taking a stand. And to have a truckers, who are physically the ones doing it, we want to support them.”