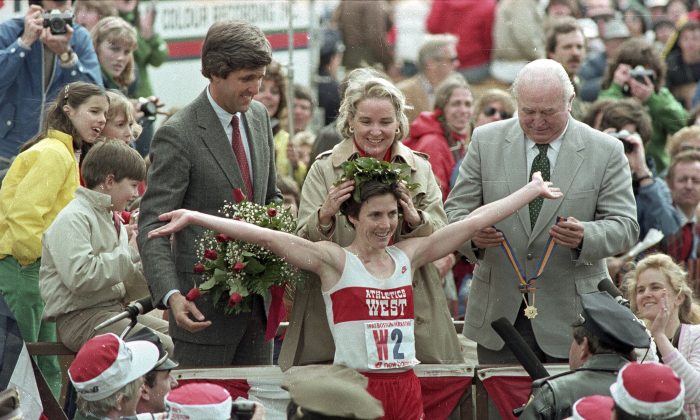 FILE - In this April 19, 1983, file photo, Joan Benoit receives her laurel wreath and reacts to cheering crowds after winning the Boston Marathon in record time for the women's division, in Boston. Massachusetts Lt. Gov. John Kerry (L) in red tie, stands behind her. (AP Photo/File)
US

BOSTON — America’s marquee marathon is ready for its close-up.

“Boston,” the first feature-length documentary film about the Boston Marathon, is in the works. Its creators say the movie will go well beyond the 2013 bombings to retrace the iconic footrace’s first steps in 1897.

“Over the years, the Boston Marathon has had so many extraordinary stories of people achieving and accomplishing things,” said producer Megan Williams, an Oscar-nominated filmmaker. “It’s like looking at cultural and social change over the last century through the lens of this major sporting event.”

Two feature films (one starring Mark Wahlberg), a stage play and an HBO special also are in production, though they’re all about the 2013 finish line attacks that killed three spectators and wounded more than 260 others.

No Boston documentary would be complete without the dark events of 2013. “Boston,” however, will focus less on the chaos than the comeback. The producers had 56 cameras along the course in 2014 for the marathon’s first running since the bombings.

Director Jon Dunham said the city’s determination to take back its namesake race will be a recurring theme in the movie, which was conceived before the attacks.

But the film will be a sort of highlights reel from the 120-year-old marathon, the nation’s oldest. The Boston Athletic Association, which organizes the race, gave Dunham exclusive rights to its archive of photos, video and marathon memorabilia.

“Boston” will tell the stories of some of the greatest marathoners ever to conquer the hilly 26.2-mile course stretching from Hopkinton, Massachusetts, to Boston. They include four-time winner Bill Rodgers; Johnny Kelley, who ran 61 Bostons and won two; and Kathrine Switzer, who in 1967 became the first woman to run with an official bib number.

“It’s a huge undertaking. We’ve got 300 hours of stuff we shot, not counting the archival material,” said Dunham, who hopes it will psych up runners like his popular “Spirit of the Marathon” films — cult classics that followed select amateur and elite runners at the 2005 Chicago and 2012 Rome marathons.

Nothing rivals the Boston Marathon in terms of sheer lore, said Tom Derderian, a running coach and author who’s serving as an executive producer, along with 2004 Olympic marathon bronze medalist Deena Kastor.

“The marathon is a mirror in which you can see the reflections of the times in every year,” he said. “For instance, the world of the 1910 Boston was not this world — it featured young men who were considered at great risk of ruining their health by running. That was the essential myth of those times.”

Derderian ticks off other examples: wild speculation in the 1920s that fueled rampant betting on the winner, and unemployed men who ran during World War II in hopes the media attention would help them compete for scarce jobs.

“Boston” also will follow more modern heroes, such as 2014 victor Meb Keflezighi, the first American man to win in 31 years.

But the real star is the race itself.

The movie tentatively is set to premiere in April 2017 in conjunction with the 121st edition of the race. John Hancock Financial, the marathon’s principal backer, has signed on as the film’s title sponsor, though Williams said she’s still working to raise half of the project’s $2 million budget.

“I’m not a runner and I’m not from Boston,” Williams said. “But I hope our film really captures the uniqueness and importance of the Boston Marathon.”