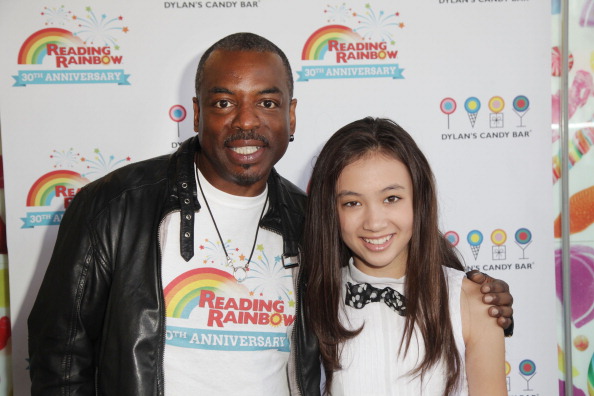 Sounding a little bit like that washed up actor on “The Simpsons,” LeVar Burton wrote “Many people know me for the roles I have performed as a professional actor …” Of course we remember you, LeVar Burton! From “Roots,” from “Star Trek”, and of course from your 30 years hosting the children’s book program “Reading Rainbow” on PBS.

It was the best, most carefully thought out, most flexible and ingenious Kickstarter campaign ever. Burton wanted to revive “Reading Rainbow” for the 21st century. It made sense. He said the original idea of “Reading Rainbow” was “to meet them where they are”—luring children to reading by touting books on TV. Touting is not the right word. By lovingly presenting books on TV, in a way that woke up that love in the audience, is more accurate. “Reading Rainbow” was so successful because of its sincerity, and its high quality. But its key technique was finding the potential book lovers via television.

“TV is not that place anymore,” Burton wrote.

So after his 30-year stint of hosting “Reading Rainbow,” he decided to try to bring it back, fully digital, all on the Interwebs.

First the team created a tablet app, two years ago. But as Burton noted, not every family has a tablet. He wanted to bring it to classrooms and to the Web. His daughter encouraged him to try a Kickstarter campaign. The campaign broke Kickstarter records. Burton and his team hoped to raise $1 million. They raised $1 million the first day.

This does my heart good. I see so much in it.

First of all, I see Burton, an artist who always cared about telling stories that were important.

He knew how much people valued “Reading Rainbow,” and he bought an interest in it after it went off the air. That is determination. I like that. He was not going to let that cultural touchstone fade away. He was going to reinvent it.

A Passion for Reading

As the Kickstarter campaign concluded, he wrote, “Today, I am fortunate enough to be the co-owner and steward of the READING RAINBOW brand, and am thrilled to continue our mission: ensuring that new generations of children develop a passion for reading and a love of the written word.”

The other great part you cannot help but like is that groundswell from people. They raised more than five times more than they had hoped. It may have been people who care about children becoming literate. It may have been people who grew up with the series. It looks as if many supporters belonged to that special tribe, the hard-core “Star Trek” fan.

Go, Geordi! Live long and prosper! The fabulous alphabet soup of rewards they added in as the thing snowballed included “Star Trek” rewards, separate from any other reward. That made me chuckle. This subcategory was ready to boldly go into the wallets of those who support Geordi La Forge, the blind, brave, and good engineer on “Star Trek, the Next Generation.”