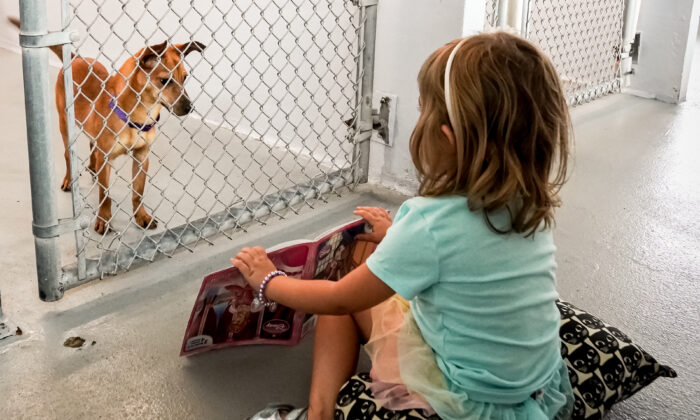 Reading Is ‘Going to the Dogs’ in Southwest Florida

FORT MYERS, Fla.—Melissa Meehan leads three children through the thick glass double doors of the kennels, where many furry bodies sit quietly, while some others are very vocal—but all are rife with anticipation.

Clutching a book in one hand and a pillow in the other, Karl, 6, Karsen, 4, and Kaleb, 2, approach the enclosures and settle in to read to their friends at the Gulf Coast Humane Society (GCHS), where on any given Saturday, once a month, children and some adults can participate in a unique reading program.

The “Reading to Dogs” hour encourages children, some of whom aren’t avid readers or may not yet know how to read, to sit on the floor near the dog of their choice, turn the pages of a book, and read, or, if they can’t read yet, tell the story in their own words, with their parents nearby.

“The dogs might not understand the words or comprehend what the children are saying, but they love that someone has stopped by to talk to them,” said GCHS manager Shannon Palzer. “Many of them will sit next to the gate and listen; it’s really cute to watch.”

But who does it benefit—the people or the dogs?

Meehan and Nate Turcotte, assistant professors of education at Florida Gulf Coast University (FGCU), spend one Saturday every month observing the interactions between the children and the dogs as they read and are being read to. They’re not only watching the social interaction of the children with the dogs, but monitoring their level of confidence with reading skills.

“They don’t feel judged when reading, and they also get to interact with animals they might not [have] at home. They also see other children reading and enjoying it,” Meehan told The Epoch Times during a recent visit to the Gulf Coast Humane Society.

“I encourage this freedom,” she said pointing to the children sitting in front of the kennels reading to the dogs. “They read what they want, how they want, with which dog they want. It helps with motivation. We found that with the participants, they experience an increase in confidence and motivation to read.”

Palzer pointed out other benefits of the program: “It is a great way for children to get an early start on community involvement.”

“One of our older students built a bookshelf for the books the children read to the dogs,” she said. “It was a Girl Scout project, so the program sometimes turns into other projects which we support—that’s what I mean by community involvement.”

Turcotte said that when children read to a certain dog one month and the next month it’s no longer there, they prepare the children in advance by telling them the dog has been adopted.

“Most young children don’t understand the word ‘adopted,’” he said. “So we tell them they were chosen by people who are giving them forever homes.”

By keeping it simple, it helps them understand where the dog is, he said.

“They know the dogs need good loving homes,” Turcotte said. “You just keep the explanation simple to where they can understand, so they don’t become upset that the dog isn’t there anymore.”

Call it doggy enrichment or a children’s social experiment, FGCU researchers hope to gain more knowledge on emotional/social interactions, reading skills, and how attentive and engaged the children are.

The project began when Meehan was a teacher in Southwest Florida. While teaching kindergarten, she was earning her doctoral degree at FGCU and thought it would be the “best research project.” Meehan is also the owner of a shelter dog.

“I have three dogs myself—one of them I adopted from this facility—and I thought it was a good subject for a research project,” she said during the visit. “We can find out more about the successes, the challenges, and get more people aware of it. We can give them feedback on what worked for us and what didn’t. For me, it’s a very neat project. It’s kids and dogs—my two favorites.”

The next step in the program was a Facebook page for parents to sign up their children to be a part of the once-a-month Saturday event, she said.

“I’m hoping that this will catch on, and we can do it more than just once per month,” she said. Meehan said she usually fills two groups on a Saturday and hopes to expand the program to other shelters so more children and more pets have a chance to share the experience.

Meehan recalled observing a little boy talking to a dog. She asked him why he liked to read to dogs, and he replied, “Because dogs are great listeners.”

“I thought that was just beautiful,” she said.

Kelsey Gottfried brings her children—Karl, Karsen, and Kaleb—to the shelter so they can get a positive experience and, at the same time, enhance their love of books.

“Karl is the only one who can truly read to the dogs,” she said. “The other two are telling the story they think the book says. I just enjoy the fact they are manipulating books and not tablets.”

Gottfried said recently that 4-year-old Karsen had a “bad experience” with a dog while they were at the post office in Fort Myers.

“It was supposed to be a service dog, and the dog ended up snapping at her because they were at eye level” with each other, she said, recalling the event. “I brought her here so she can see that not all dogs are like that, and overcome her fear of them.”

At first, Karsen was apprehensive about sitting in front of the dogs and was clinging to her mother, but with a little encouragement, she sat down by the gate and began to “tell her story” to a little black wire-haired dog. The dog sat contently while she “read” and showed him the pictures in her princess book. Soon she wanted to visit other dogs and read to them as well and, detaching from her mother, ventured out on her own to sit in front of other kennels.

“It didn’t take long to overcome that fear,” her mother said, laughing.

Helping to remove the stigma about shelter dogs—that there’s something wrong with them, and they wouldn’t make good pets—is yet another plus that Meehan says they have been able to show through their research.

“They see firsthand that all kinds of dogs, even pit bulls, are really nice. And it supports an understanding of what shelters do,” she said.

Tufts University research finds that for children, a pet can provide opportunities to practice positive social interaction as well as develop empathy and compassion. Their research finds that children who interact with pets can have positive results in that they’re “able to practice positive social interactions and develop empathy and compassion.”

Social capital is a concept that focuses on social relations that have productive benefits and a concept that Megan Mueller, an associate professor of human-animal interaction at Tufts University, says is important to understand and study.

“Interestingly, pet owners have consistently reported higher levels of social capital in their communities than people without pets—both in the U.S. and internationally,” Mueller stated in her research.

She also said there are health benefits from interacting with pets.

“The trust inherent in these connections can lead to better health and well-being,” she wrote in her paper.

Meehan agrees that the research is beneficial, and has proven her points in her own research.

“Reading to the dogs helps to bring comfort to and reduce the anxiety of shelter dogs, and it nurtures empathy in children,” she said. “The pandemic also brought other issues to light.”

During the pandemic, people were isolated during the shutdowns, which brought many people’s mental health issues to the surface. However, pet owners were the exception, she said.

“During the COVID-19 pandemic, dog owners were more likely than those without dogs to go for regular walks outdoors, providing an opportunity for community engagement during a period of extreme social isolation,” she said. ‘The presence of an animal has even been found to increase positive social interactions in the workplace.”

Meehan is working with local schools and other shelters so their animals can benefit from the reading program.

“My hope is that this program grows and becomes bigger,” she said. “I think this is so important—not just for the reading benefit, but the socialization benefit of both humans and animals.”

The reading hour is open to “all ages through signing up for their Saturday session on Facebook,” Meehan said.

During The Epoch Times’ visit, three of the dogs that were being read to were adopted, finding “forever homes,” Palzer said. “Now, that’s happiness.”