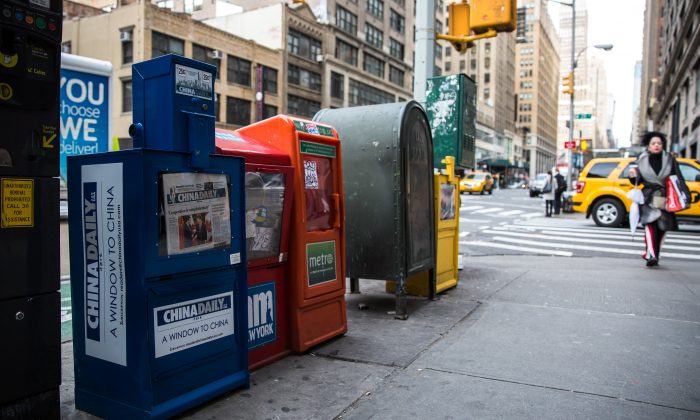 In China’s heavily controlled media environment, state mouthpieces such as Xinhua and China Central Television indoctrinate audiences with the Party line. A formidable bureaucracy of censorship watches the diverse array of platforms, from print to screen to web, across which 1.3 billion Chinese receive their information on all conceivable public issues.

And in recent years, Beijing has used its economic might to project its narratives across the open societies of many foreign nations, including the United States.

Prestigious mainstream media, enticed by the possibility of access to China’s vast—but strictly controlled—market, accept the regime’s influence in their coverage.

A Nov. 11 article by The Wall Street Journal highlights the inroads Chinese state media and associated firms have made, focusing on the example of the documentary “China: Time of Xi,” produced by the Asian arm of Discovery Channel in close cooperation with the China Intercontinental Communication Center.

The China Intercontinental Communication Center is run by the Communist Party’s propaganda department, and its role, as the Wall Street Journal report notes, is conspicuously absent from the documentary credits.

The China International Television Corporation (CITC), another state-run firm, has nearly 70 subsidiaries around the world, in countries including the United States, Japan, France, and Australia.

In an article published on the website of the state-run Ministry of Culture of the People’s Republic of China, the CITC established the Silk Road Television International Cooperation Community in 2016. The community has partnered with dozens of companies from 33 countries involved in the One Belt, One Road infrastructure development project that the Xi administration pushes as a keystone of Beijing’s foreign policy.

According to the report, more than 10 Chinese-produced documentaries and other programs received prime airtime on the national broadcasters and internet-based media of 20 countries.

According to a report titled “Guiding Objectives for Exports of Cultural Products and Service,” available on the website of China’s State Administration of Taxation, the “focus objectives” of the television industry include “obtaining favorable potential for expansion.” The report calls for increased production and distribution of cultural programming, as well as establishing mature overseas sales and propaganda networks.

According to the latest annual report of the U.S. China Economic and Security Review Commission (USCC), China has tightened restrictions on domestic and foreign media, while Chinese state media have rapidly expanded overseas. While the U.S. government has provisions for limiting the activities of media workers serving foreign governments, in the form of the Foreign Agents Registration Act, many of the individuals working with Chinese state media in the United States are not covered by the regulation.

In the example of China Daily, an English-language paper run by the Communist Party, only top executives are required to register with U.S. authorities.

According to Reuters, the act was first passed in 1938 in the lead up to World War II to combat German propaganda efforts. It requires foreign governments, political parties, and any lobbyists they hire in the United States to register with the Department of Justice.

In addition to spreading propaganda to benefit the image of the authoritarian regime, China’s state media presence in the United States poses a security risk.

In a May 4 written testimony before the USCC, East Asia analyst Sarah Cook of the human rights organization Freedom House wrote that “the number of people and entities registered from China seems to be remarkably few considering what we know about Chinese intelligence gathering and information warfare efforts.”

According to Cook, “There appear to be loopholes in enforcement or definitions. These should be closed.”

The penetration of foreign media space reflects the Chinese regime’s long-term goal of obtaining an ideological foothold in societies where people have the freedom to criticize its authoritarian system.

Since the 2000s, the Chinese regime has promoted hundreds of Confucius Institutes in schools and universities around the world. The institutes, marketed as a language and cultural instruction program, have met with heavy criticism from rights groups and dissidents pointing at their direct links to the Communist Party’s overseas offices, as well as their ideological directives, discriminatory hiring practices, and negative impact on academic openness.

In Hollywood, the influence of Chinese money is apparent. In late 2016, China’s state-linked Wanda Group made multibillion-dollar investments in the American film industry, stirring up concerns about violation of U.S. antitrust laws, in addition to undue ideological influence on film production.

Several recent films have been criticized for avoiding topics deemed sensitive for Chinese censors, one of the earliest notable examples being a remake of “Red Dawn,” in which the antagonists were changed from Chinese to North Korean military forces.