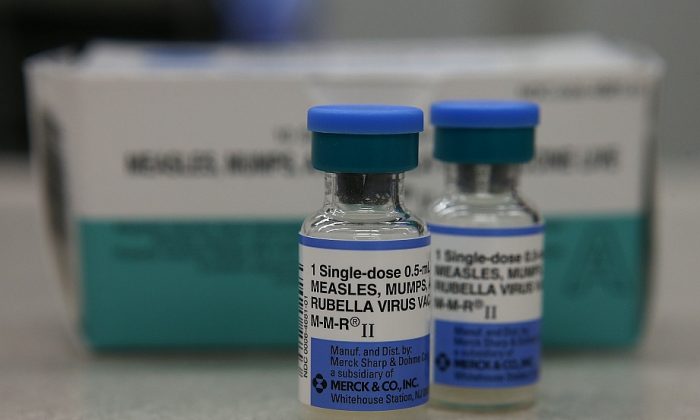 Vials of measles, mumps, and rubella vaccine are displayed on a counter at a Walgreens Pharmacy on in Mill Valley, Calif., on Jan. 26. (Justin Sullivan/Getty Images)
US

A doctor in Arizona is urging parents to get their children vaccinated for measles after his 2-year-old daughter, who is undergoing chemotherapy for leukemia, was exposed to measles while in the hospital.

Dr. Timothy Jacks, an Arizona pediatrician, told Congress on Tuesday he’s been personally impacted by the measles outbreak around the United States. Speaking to the Senate Committee on Health, Education, Labor and Pensions, he said the immune system of his daughter, Maggie, was not able to fight the virus even after getting the MMR vaccine. His other child, Eli, also was exposed, but he’s too young to get the vaccine.

“My measles-exposed children have been quarantined at home for nearly two weeks now, and we anxiously watch for signs of disease,” Jacks said, according to a video of his statements captured by C-SPAN. He added that due to her immune system, she has to go to the emergency room if she gets a fever.

He wrote an open letter earlier this month to parents who didn’t vaccinate their children and exposed his daughter to the virus.

“I assume you love your child just like I love mine. I assume that you are trying to make good choices regarding their care. Please realize that your child does not live in a bubble. When your child gets sick, other children are exposed. My children. Why would you knowingly expose anyone to your sick, unvaccinated child after recently visiting Disneyland? That was a boneheaded move,” he wrote in a blog post.

Jacks said for children who can’t be vaccinated like his daughter, they “remain at risk. They cannot be protected, except by vaccinating people around them.”

He elaborated on how his children got exposed, writing: “It was Wednesday.  Maggie had just been discharged from Phoenix Children’s Hospital after finishing her latest round of chemotherapy.  That afternoon she went to the PCH East Valley Specialty Clinic for a lab draw.”

“Everything went fine, and we were feeling good … until Sunday evening when we got the call.  On Wednesday afternoon, Anna, Maggie, and Eli had been exposed to measles by another patient.  Our two kids lacked the immunity to defend against measles.  The only protection available was multiple shots of rubeola immune globulin (measles antibodies).  There were three shots for Maggie and two shots for Eli.  They screamed, but they now have some temporary protection against measles.  We pray it is enough.

His two children were exposed to measles on Jan. 21, but they could possibly start showing signs from then until Feb. 11.

“After a new blood test, both my wife and I were found to be immune to measles, but the children will remain in isolation until February 11,” he wrote.

The U.S. Centers for Disease Control and Prevention says the measles outbreak is linked to a group of unvaccinated visitors at Disneyland. It has spread to 17 states with 121 confirmed cases, said the agency on Monday.

During his visit to Congress, Jacks stressed to lawmakers that it’s necessary to promote the importance of getting vaccinated.