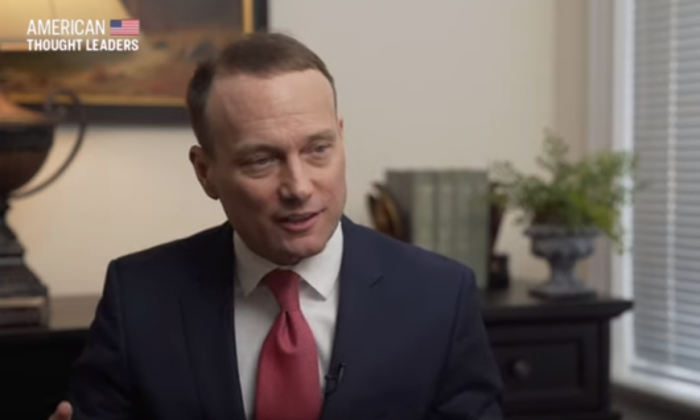 It took five months for the $1.5 trillion federal appropriations bill to surface after the United States’ fiscal year began on Oct. 1, 2021, but only hours for the U.S. House—and less than a day for the U.S. Senate—to adopt it on March 9 and 10.

The massive omnibus package is a continuing resolution, not a budget, as Congress hasn’t adopted an annual budget since 2016. It includes a $46 billion increase or 6.7 percent boost for non-defense programs, a $42 billion, 5.6 percent increase in defense allocations, and $13.6 billion in supplemental appropriations to aid Ukraine.

But no one could have read the entire 2,741-page bill within the 24-hour span that it was introduced and adopted, at least not all of it, at least not those who voted on it, says Adam Andrzejewski, CEO and founder of Chicago-based OpenTheBooks.com, a nonprofit group that focuses on transparency in government spending.

The U.S. Office of Management and Budget defines an “earmark” as “funds provided by Congress for projects or programs where the congressional direction [in bill or report language] circumvents the merit-based or competitive allocation process, or specifies the location or recipient, or otherwise curtails the ability of the administration to control critical aspects of the funds’ allocation process.”

Earmarks had been banned for a decade from the budget process until March 2021 when House Republicans, in a secret caucus vote, agreed with House Democrats to bring them back.

That makes this spending bill larded with earmarks unlike any budget appropriations package since President Barack Obama’s first term, and a costly trend for U.S. taxpayers, Andrzejewski said.

The bill “is a little more” than the typical excessive spending, he said.

“We got Republicans joining Democrats to drain the U.S. Treasury from the left and the right,” he said.

Andrzejewski called earmarks “the currency of corruption in Congress,” with virtually every member sluicing up to funnel money into their districts.

“It’s legal bribery to give away member pet projects for votes,” he said.

California lawmakers garnered $766 million in earmarks for projects and programs in their state.

Among earmarks of note are $1 million for a “farm-to-refrigerator training facility” in Pennsylvania; $2 million for George Mason University’s Center for Climate Change; $2.5 million for a museum in Vermont; $3 million for a fisherman’s coop facility in Guam; $995,000 for “Grid Resilience and Equity in the Energy Transition” research at the University of Massachusetts, with an emphasis on addressing racist inequality in the energy system; $500,000 for the National Underground Railroad Freedom Center in Cincinnati; $496,000 in the name of “health equity” for “pool improvements” in one New York Democrat’s congressional district; and $500,000 for Worcester State University in Massachusetts to promote diversity and inclusion for STEM students to study climate change.

That’s the tip of the iceberg, Andrzejewski said, and it’s made worse by the bill’s swift adoption that came without Congress—never mind the public—having a chance to read through the bill, especially its 367 pages of earmarks.

Last March, Sen. Rick Scott (R-Fla.) filed Senate Resolution 84, which would require a 72-hour pause before any vote on an appropriations bill, similar to the same requirement imposed on state legislators across the country before voting on their state budget bills.

“Too often, lawmakers in Washington pass bills without having time to read them before they vote,” Scott said in a statement accompanying the resolution.

“These are new laws that impact American families and businesses and sometimes even authorize billions or trillions in tax dollar spending. Scary, right? It’s ridiculous Washington dysfunction, and it has to end.”

Scott’s resolution, which has four Republican co-sponsors, has been idling unheard in the Senate Rules and Administration Committee since it was introduced.

OpenTheBooks.com is calling on taxpayers to support its “Read the Bill” petition, which would require that “all legislation and conference reports should be publicly posted in full on the Internet for at least 72 hours before final floor consideration by Congress so taxpayers, the media, and members of Congress have an opportunity to read and review the text before passage.”