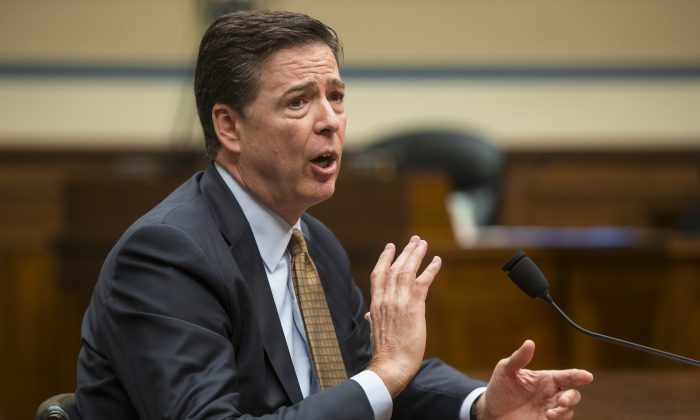 FBI Director James Comey testifies on Capitol Hill in Washington, Thursday, July 7, 2016, before the House Oversight and Government Reform Committee to explain his agency's recommendation to not prosecute Democratic presidential candidate Hillary Clinton over her private email setup during her time as secretary of state. (AP Photo/J. Scott Applewhite)
US

FBI director James Comey wrote a letter to Congress on Sunday saying that no charges will be recommended against Hillary Clinton after the latest emails were reviewed.

Over the summer, Comey announced that after an investigation into Clinton’s usage of a private email server, it didn’t recommend criminal charges against her. But on Oct. 28, Comey said the FBI was looking into reviewing emails related to her case, which was leaked to Rep. Jason Chaffetz before it circulated widely.

The letter drew criticism from Clinton’s campaign, Democratic leaders, and a number of media outlets.

I write to supplement my October 28, 2016 letter that notified you the FBI would be taking additional investigative steps with respect to former Secretary of State Clinton’s use of a personal email server. Since my letter, the FBI investigative team has been working around the clock to process and review a large volume of emails from a device obtained in connection with an unrelated criminal investigation. During that process, we reviewed all of the communications that were to or from Hillary Clinton while she was Secretary Of State.

Based on our review, we have not changed our conclusions that we expressed in July with respect to Secretary Clinton.

Clinton communications director Jennifer Palmieri told reporters the campaign is happy that the investigation has been resolved. “We have seen Director Comey’s latest letter to the Hill,” she said, CBS reported. “We were glad to see that as we were—that he has found as we were confident that he would that he has confirmed the conclusions that he really—reached in July and we’re glad this matter is resolved.”

Trump responded to the claims at a rally.

“You have to understand, it’s a rigged system,” he told a crowd, according to CBS. “And she’s protected.”

The @FBI says @HillaryClinton should not face charges over her emails, after a fresh review. Here’s the letter from FBI director James Comey pic.twitter.com/bYqydkCnru

“None of this changes the fact that the FBI continues to investigate the Clinton Foundation for corruption involving her tenure as secretary of state. Hillary Clinton should never be president,” his statement read, as reported by CNN.