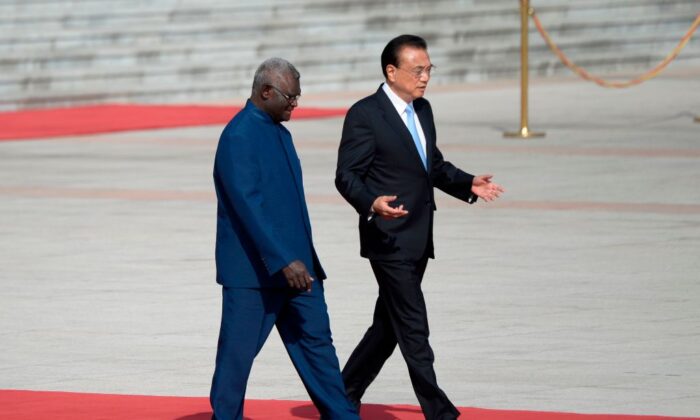 Solomon Islands Prime Minister Manasseh Sogavare (L) talks with Chinese Premier Li Keqiang as they prepare to inspect honour guards during a welcome ceremony at the Great Hall of the People in Beijing on Oct 9, 2019 in Beijing, China. (Wang Zhao/AFP via Getty Images)
Australia

Embattled Solomon Islands Prime Minister Manasseh Sogavare has sought to justify a contentious security deal with Beijing, saying his government did not react “hysterically” to the AUKUS deal when it was announced.

Solomons Prime Minister Manasseh Sogavare has faced scrutiny and pressure over a security pact with the Chinese Communist Party (CCP) that could lead to troops and weapons being stationed in the region.

Speaking in the Solomon Islands Parliament, Sogavare delivered another fiery address in defence of the agreement, accusing Australia of not notifying him of the AUKUS trilateral agreement between the United States and the United Kingdom.

The deal was unveiled in a surprise announcement and will see Australia armed with nuclear-powered submarines in response to a more aggressive Beijing.

“When Australia signed up to AUKUS, we did not become theatrical or hysterical about the implications this would have for us,” he added. “We respected Australia’s decision.”

Australian Prime Minister Scott Morrison has denied Sogavare had no knowledge of AUKUS saying all Pacific nation leaders were notified after the official announcement.

“I did have that conversation … and no issues were raised at that time in that discussion,” he told reporters on April 29. “As time goes on and new relationships are entered into, there’s obviously been some other influences in the perspective taken by the Solomon Islands prime minister.”

He also said there was a “remarkable similarity between those statements and those of the Chinese government.”

Morrison emphasised the role Australia continued to play in the Pacific country saying, “Australia is their primary security partner in the region. We’re the first call.”

The Australian prime minister has stated outright that there “would be no military bases” in the region, warning it would be a “red line” for his government.

The White House has also warned that the United States would “respond accordingly” if Beijing were to set up a military presence in the South Pacific following a visit by U.S. Indo-Pacific coordinator Kurt Campbell where they also met with religious leaders and key members of the political opposition.

Experts have warned that a fully implemented security deal between the Solomon Islands and Beijing could lead to geopolitical tensions in the region akin to the South China Sea. The Solomons was the site of extensive fighting during World War II—the Battle of Guadalcanal—because of its critical position and influence over vital sea lanes.

Prime Minister Morrison has also hinted that other Pacific nations have faced similar “pressure” to adopt a security deal with Beijing.

“Do you think there’s not the same pressure going on in Papua New Guinea that there is in the Solomon Islands? Of course, there is. That is happening in all of those countries,” he told reporters on April 20.

Beijing has previously shown interest in the autonomous region of Bougainville in the PNG, reportedly offering US$1 billion in infrastructure investment in the area under the banner of the Belt and Road Initiative. Bougainville is also on course to achieve independence from PNG by 2027.