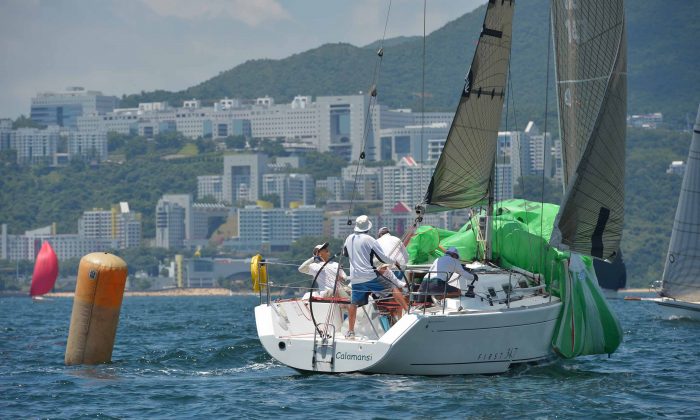 HONG KONG—A re-sail race in place of the cancelled Race-2 was an added bonus for the 60-boat fleet that gathered for Day-6 of the Hebe Haven Yacht Club, Quest Yachting Typhoon Series on Sunday Aug 17, 2014.

Race Officer, Inge Strompf Jepsen set a Windward-Leeward course for the re-sail race, within Port Shelter in a 9-knot south westerly and used the same start line for the Islands Race (Race-8) that followed.

With 60 boats and four starts per race (IRC-A and B, IRC-C, IRC-D and Sports Boats, and HKPN) an experienced race Officer was needed to control operations. Stromf-Jepsen is used to overseeing big yachting events such as the Hong Kong Yacht Club’s Round-the-Island Race with up to 250 competitors and was just the person for the job.

The re-sail race went perfectly with only a short delay for the slower boats to finish before commencing the start sequence for the Islands Race.

Stromf-Jepsen then set three different courses for the Islands ranging from 20 Nm for the IRC-A boats, 16-Nm for IRC-B, C and D, and Sports Boats, and 10 Nm for HKPN. The strategy was excellent with many boats from the different classes finishing together.

With 7-races now completed in the series 1-discard is allowed, but provided a race takes place on the final day of the series (this coming Saturday Aug 23) a further discard will be available.

Re-Sail Race
With the large number of boats taking part and quite a short course for the re-sail race, proceedings became quite hectic at the Windward and Leeward marks. This was especially so with big boats such as the TP52 “FreeFire” and the Reichel Pugh 75 “Jelik” needing to pick a way through the smaller crafts.

In HKPN Jive, “Surfdude”, “Kiasu” and “Bits & Pieces” were the top performers.

Islands Race
A collision between “Signal 8” and “Ambush” at the start of the IRC-A race wrenched off the Bow Sprit of “Signal 8” and damaged the Pulpit Safety Rails of “Ambush” forcing “Ambush” to immediately retire from the race.

Most other boats got off without major incident.

IRC
In IRC-A, “Jelik” won her second Line Honours of the day finishing 5-minutes ahead of “FreeeFire”. But on corrected time the top three boats were “EFG Mandrake”, “HuaAn” and “Signal 8”.

On provisional results “EFG Mandrake” looks well placed to take the Series win in IRC-A. “Signal 8” is currently in 2nd place and “HuaAn” is 3rd position, but “Ambush” may regain her 3rd place after a further discard is taken.

In IRC-B “Mojito” is leading the Series and based on 2-discards “Sell Side Dream” is lying in 2nd place with “Stella” in 3rd position.

In IRC-C, “Dexter II” leads the Series by 2-points from “Talkinghead”, but “Gearbox”, “Whiskey Jack” and “Vixen” are just 2-points further behind.

“Taxi”, “St Happens” and “Calamansi” are having a great tussle in IRC-D with only 1-point separating the three boats.

Gaston Chan of “Calamansi” commented on the contest “Three boats of different designs, “St Happens” (Sonata 8), “Taxi” (an Impala 28) and “Calamansi” (Beneteau First 34.7) need to win Race 9 to win the series—it is getting exciting”.

“Merlin” has a 4-point buffer for the Series over “Black Magic” who in turn has 3-points advantage over “Sidewinder” there is then an 8-point gap to the next boat, “Good Vibrations”.

HKPN
“Surfdude” took line honours in the Islands Race, but was way down in 15th place on corrected time. “Dolphin Six” came 1st, “Elites 99” 2nd, “Scintilla” was 3rd and “No One Else” was 4th.

Because there is a large fleet in the HKPN competition any one of a number of boats may still win the Series. Currently “Kiasu” has a small advantage over “Jive” with “Windseeker” and “JeNe PaBe” lying a further 7-points behind.

Next Race
The final race of the Typhoon Series takes place this Saturday Aug 23.