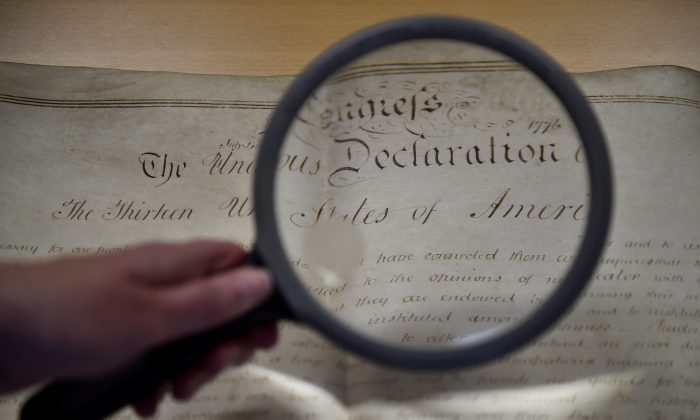 A rare handwritten copy of the U.S. Declaration of Independence is seen at the West Sussex Record Office in Chichester in south England, Britain, on April 27, 2017. (REUTERS/Hannah McKay)

The United States has much to celebrate this Fourth of July.

We live in a nation that is prosperous and free. Our lives are mostly stable, and great portions of our children aren’t overseas in a bloody shooting war for some rocky outcrop we never heard of. (We should, however, continue to pause and remember our servicemen and servicewomen who are overseas and engaging the enemy.) Our politics are difficult but largely still functional. Order and stability govern most days for most of us.

None of that should be taken lightly, and if we knew more world history, it wouldn’t.

Yes, we have many problems in the United States. We are too divided on politics and have lost much of our civility and the good manners that keep political disagreements from resembling war. Our core institutions—from the family to civic associations to schools—are weaker than ever and no longer serve many of their vital functions that make a free society work.

Still, we should be thankful for where we are in 2019, remember where we came from, and resolve to be worthy of those who came before and built the nation we are privileged to call home.

For this Independence Day, I revisited the Declaration of Independence and urge you to do the same. Here are a few things that struck me:

First, we should remember what a bold and decisive stroke the Continental Congress executed by declaring our independence. They were committing treason. They were seceding from the country that had birthed them, protected them, and to whom they were pledged. We celebrate the document, but no matter what the document ended up saying, it was the act of declaring their independence that could get them hanged, and their homes confiscated or destroyed, leaving their families desperate. Still, they boldly declared they were independent.

Second, we should remember that these men weren’t actually “revolutionaries” in any modern sense; their “revolution” was really a secession. They were declaring themselves independent of the mother country, they weren’t attempting to overthrow the social institutions, economy, or religious establishment. They simply wanted to be free to govern themselves and let England govern itself as it pleased.

These men were conservative secessionists, in other words, not radical social reformers. Prudence, as political theorist Russell Kirk often said, is the great conservative virtue, and they demonstrated it: “Prudence, indeed, will dictate that Governments long established should not be changed for light and transient causes. … But when a long train of abuses and usurpations, pursuing invariably the same Object evinces a design to reduce them, under absolute Despotism, it is their right, it is their duty, to throw off such Government, and to provide new Guards for their future security.” It would be hard to put the conservative vision for prudential change much better.

Third, there is much more to the Declaration than the famed second sentence. “We hold these truths to be self-evident, that all men are created equal, that they are endowed by their Creator with certain unalienable Rights, that among these are Life, Liberty, and the pursuit of Happiness.”

Since Abraham Lincoln used this line as his anvil upon which to reforge the national conscience after the South’s attempted secession, it is almost the only remembered aspect of the document. Indeed, the musical sensation, “Hamilton,” goes even further, memorializing the document simply with one part of the one line: “We hold these truths to be self-evident, that all men are created equal” before making a clever political quip about including women in the sequel.

The next line is equally important—“That to secure these rights, Governments are instituted among Men, deriving their just powers from the consent of the governed.” Here, we have the core of what governments are to do—secure the rights to life, liberty, and the pursuit of happiness (which was an amendment of the philosopher John Locke’s recognized rights to life, liberty, and property). The emphasis is on securing people’s rights to be left alone—to live, to be free, and to accumulate property and raise a family and whatever else might make life worth living. God created us equal, in other words, but governments are to ensure we are free.

What is more, we are told that governments rightfully exist when they derive their powers from the consent of those of us who are governed. And if they become destructive of the ends of life, liberty, and pursuit of happiness, what are we to do? Well, the people have the right to abolish the government and institute a new one on sounder principles that seem “most likely to effect their Safety and Happiness.”

The great remaining bulk of the Declaration is seldom ever read, but was much more important in effecting the goal of securing independence than the first few sentences that are known to the public today. That larger section of the document contains a long list of grievances for abuses against the colonies by the King. They are about trade, taxes, trials, due process, governing institutions, the prevention of necessary laws, and the encouragement to instability, and all amount, it says, to a tyranny having been created over the colonies.

It was government abuses of power, not abstract principles, that drove the colonies to declare their independence.

On this Independence Day, we should all read again the Declaration of Independence—all of it—and resolve to be worthy of the courage, inspiration, insight, and independence of our forefathers.

Gary L. Gregg holds the Mitch McConnell Chair in leadership at the University of Louisville and is the author or editor of a number of books on U.S. history and government.

Gary L. Gregg
Gary L. Gregg is director of the McConnell Center at the University of Louisville and editor of “Securing Democracy—Why We have an Electoral College.”