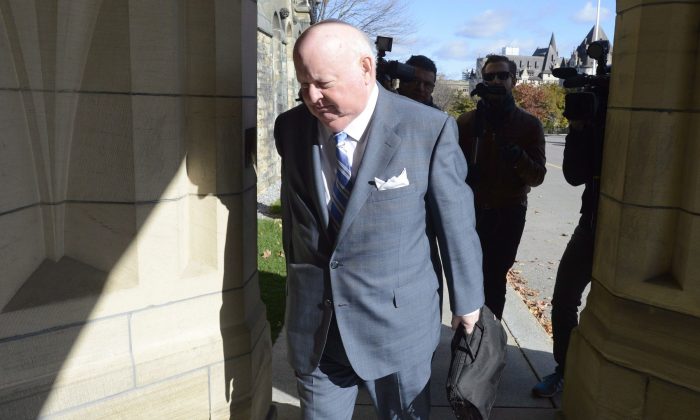 Sen. Mike Duffy walks to the Senate on Parliament Hill on Oct. 28, 2013. Now that Duffy has been formally charged, the Liberals are urging the ethics commissioner to re-open her investigation into the Senate expense scandal. (The Canadian Press/Adrian Wyld)
Canada

OTTAWA—The Liberals called on the federal ethics watchdog to re-open her investigation into the Senate expense scandal on Wednesday, a scenario Mary Dawson’s office suggested wasn’t on the immediate horizon.

The RCMP announced last week it was charging Duffy with 31 criminal counts related to his expense claims, accusing him of misspending more than $200,000.

The charges stem from the disgraced senator’s housing and travel expenses, and a $90,000 payment from Nigel Wright, the former chief of staff to Prime Minister Stephen Harper. Duffy has denied any criminal wrongdoing.

Regan says that since the RCMP has concluded its investigation, there’s no reason to delay an ethics probe. Dawson had launched an investigation last year, but suspended it when the Mounties announced their criminal investigation.

“It would seem that there is no longer any impediment to the resumption of your original investigation,” Regan wrote in a letter to the commissioner.

“I would ask that you please detail any plans to resume your ethics investigation, including for those public office holders who are not under criminal indictment.”

But a spokeswoman for Dawson said the commissioner wasn’t yet prepared to re-open her investigation.

“Commissioner Dawson’s examination under the Conflict of Interest Act of the conduct of Mr. Nigel Wright remains suspended at this time,” Jocelyne Brisebois said in an email. “She expects to resume the examination as soon as it is possible to do so.”

In a court filing in November, the RCMP identified a number of people who may have been linked to the scandal. They included senators David Tkachuk, Carolyn Stewart Olsen, Marjory LeBreton, and Irving Gerstein.

Conservative party officials and employees in the prime minister’s office were also named.

“The RCMP documents allege that many of these public office holders clearly had knowledge of the $90,172.24 cheque which led to Mike Duffy being charged under the Criminal Code’s bribery of judicial officers section,” Regan said in his letter.

In April, the RCMP concluded there wasn’t enough evidence to charge Wright, who resigned after it was revealed that he provided Duffy with the money to help him cover his expenses.

A spokesman for the prime minister late Tuesday said it would be “difficult to imagine” Harper testifying at Duffy’s trial.

Jason MacDonald noted in an email that the PMO had already assisted with the RCMP investigation and that the Mounties made clear they don’t believe Harper has any knowledge of Duffy’s alleged wrongdoing.

“In my view, it’s a matter for the courts to determine whether or not Mr. Harper should testify.”
Neither Duffy nor his lawyer has responded to a request for a comment on MacDonald’s comments. The 68-year-old senator is scheduled to appear in court on Sept. 16.

Earlier this week, a new court filing provided fresh details of the RCMP’s charges against Duffy, alleging he billed taxpayers for a personal trainer, a makeup artist, and for personal travel to funerals.

It’s been a trying few days for the senator. The lawyer for Karen Duffy, a 32-year-old Peruvian woman who claims she is Duffy’s “love child,” says the former CTV newsman reached out to her this week.

Jorge Alejandro Razuri said on his Facebook page that the senator has been in touch with Karen Duffy. It wasn’t immediately clear if that meant her court action against him to establish paternity has been dropped.

“Out of respect for the parties we will not be making any further comments or statements at this moment,” Razuri wrote.