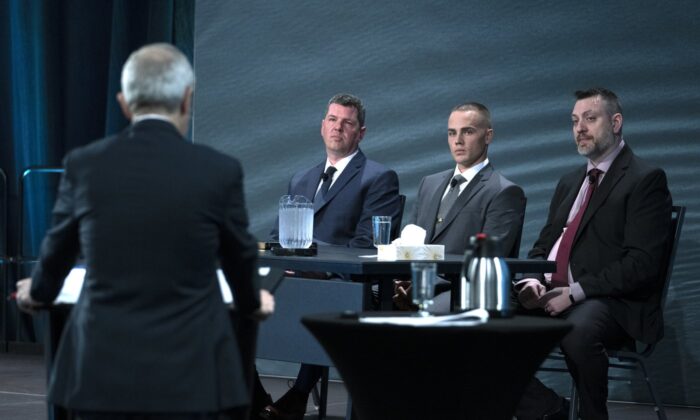 (L–R) RCMP constables Adam Merchant, Aaron Patton, and Stuart Beselt are questioned by commission counsel Roger Burrill at the Mass Casualty Commission inquiry into the mass murders in rural Nova Scotia on April 18 and 19, 2020, in Halifax on March 28, 2022. (The Canadian Press/Andrew Vaughan)
Canada

Lawyers at the public inquiry into Canada’s worst mass shooting are asking why—in an era when teens use apps to locate each other—the RCMP lacked technology to track their officers on foot.

The topic has arisen repeatedly in the inquiry’s first two months, and a senior RCMP manager is acknowledging the absence of global positioning systems on police radios as officers responded to the 2020 rampage in Nova Scotia was unacceptable.

Darryl Macdonald, the commander of the RCMP’s operational communication centre in Prince Edward Island, said in a Feb. 8 interview with the inquiry that the need for a GPS tracking system should have been addressed before 2020.

Macdonald—who has also worked as a computer-aided dispatch system co-ordinator in Nova Scotia—said the 2014 police shootings in Moncton, N.B., clarified that “when members dismount from their units (patrol cars), there is no GPS tracking of the member.”

“There is a capability within the radio system that was rolled in (during) 2016 to get GPS co-ordinates from the radios, but it has not been implemented yet, as I sit here,” he said in the interview, a transcript of which was made public by the inquiry Tuesday.

Macdonald said the inability of command centres to electronically track the officers on the scene was “not acceptable,” and he also said: “It’s 2020 when this happened and (there’s) no excuse for us not having the ability to see them when they dismount from their vehicles, especially after Moncton.”

Steve Topshee, a lawyer for families of two victims, said in an interview Tuesday that police commanders needed better GPS to know where their officers were located as a killer dressed in a Mountie uniform and driving a replica patrol vehicle murdered 22 people on April 18-19, 2020.

“If the incident commanders had been able to see and track the first responders who entered Portapique on foot, they would have been able to be comfortable sending another group (of officers) into the community,” Topshee said.

Macdonald told the commission that the RCMP are still working on ways to integrate the GPS from the radio into a mapping program “so that we’ll be able to see them when they exit their vehicles.”

He also said funding for computer-aided dispatch systems “is not sufficient” and added, “they’ve invested in other things … It’s not been invested in; it’s not a priority.”

Lawyers representing victims’ families want the inquiry to call expert testimony on why GPS wasn’t combined with mapping to track officers on foot. “If the RCMP are not using the (GPS) systems, why not?” Michael Scott, the lawyer for families of 14 of the victims, asked in an interview Tuesday.

Documents presented at the inquiry show RCMP constables Aaron Patton, Stuart Beselt and Adam Merchant entered the scene as a team and were on their own for more than 90 minutes in Portapique, as commanders feared sending in more officers might create “blue-on-blue” police shootings of each other.

During their testimony, the RCMP members agreed with lawyer Robert Pineo, when he asked them if GPS radio technology could have allowed a second team to safely operate during their response. Such a system would have allowed commanders to keep officers apprised of where other Mounties were as they tracked the killer.

Topshee, who represents family members of Aaron Tuck, Jolene Oliver and Emily Tuck, said the victims’ relatives live in Alberta, and on April 19, they were desperately trying to get information about their loved ones who resided on a small road in Portapique.

“Had the responding officers in the community had access to better mapping, it is possible the residences on all roads would have been known about and canvassed … long before they were,” he said in an email.

Jane Lenehan, the lawyer for the family of victim Gina Goulet, wondered how a group of high school students could use their “messages” app on their cellphones to pinpoint friends, while the RCMP seemed to lack awareness of where its members were.

“Only one team … went into the Portapique subdivision in that critical, initial 30 to 45 minutes and we’re told that was based on a command decision in order to avoid a blue-on-blue shooting,” she commented to the inquiry on April 13, as she listed a series of instances of confusion among Mounties.

“These we submit are just a few examples of a very big problem that played out repeatedly during the mass casualty: members not knowing where other members were.”

In an interview with the commission last year, former RCMP corporal Tim Mills—who was the leader of the emergency response team during the shooting—said they lacked a mapping system to provide members a “common picture” of the scene.

Inquiry lawyer Roger Burrill said to Mills during the interview, “That sounds like a pretty fundamental piece of information for an emergency response team to know and access proper mapping.” Mills replied: “Bingo, hundred percent. We preached that and it fell on deaf ears.”

The former RCMP member said the issue was raised after the mass shooting, and “sure enough, they were able to scrounge together something for us.”

Patricia MacPhee, a lawyer for the RCMP, said last week at the hearings she expected further details on the issue of equipment to emerge. She added the force has started to make changes, including a move to a new operational command centre that is “state of the art.”