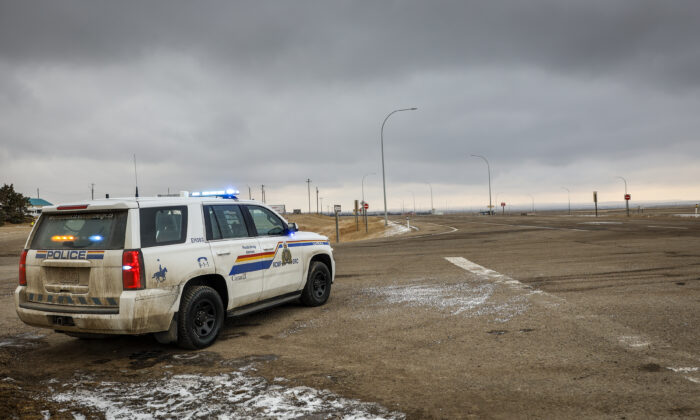 A police vehicles look out over an empty highway after protesters opposing federal COVID-19 mandates left following their blockade of the highway at the busy U.S. border crossing in Coutts, Alberta, on Feb. 15, 2022. (The Canadian Press)
Canada

The RCMP used unauthorized wiretaps and undercover officers to collect intelligence on protesters who blockaded the border crossing at Coutts, Alberta, earlier this year during the Freedom Convoy protests, court documents show.

A provincial judge unsealed the documents, obtained by the Globe and Mail and several media outlets, which were used by the police to obtain warrants for a raid on a group later charged for conspiracy to kill police officers.

“The group was said to have a willingness to use force against the police if any attempts were made to disrupt the blockade,” the law enforcement agency said in a press release on Feb. 14.

The police seized multiple firearms and a large quantity of ammunition in the raid. A total of 14 people were charged criminally, including four—Jerry Morin, Christopher Lysak, Chris Carbert, and Anthony Olienick—who were charged with conspiracy to commit murder.

The documents—known as information to obtain (ITOs)—said the police used wiretaps without judicial authorization to target the group. The police filed the first ITO on Feb. 13, and three more were filed in the days after the raid.

Using wiretaps without court authorization is allowed under section 184.4 of the Criminal Code, but is reserved for and could be justified with the Canadian Charter under circumstances where there is “imminent harm,” such as in the case of kidnapping or bomb threat.

The Supreme Court of Canada previously declared section 184.4 to be unconstitutional because it didn’t include any accountability measures. The parliament was given until April 13, 2013, to amend the provision to make it compliant with the constitution. Legislation responding to the court requirement received royal assent on March 27, 2013.

The ITOs filed on Feb. 14 to launch the wiretapping operation on the Coutts protesters were heavily redacted in the three-page section titled “Imminent Harm Interception of Private Communications.” The same title is visible in ITOs dated Feb. 17 and Feb. 19, though they were also redacted, providing few details about the unauthorized wiretaps.

“This investigation has relied on emergency intercepts of private communications,” said an ITO, dated Feb. 14, in which the police asked for the document to be sealed, saying that disclosing the document would compromise their work.

“The situation at the Coutts blockade is still ongoing and police may need to rely on emergency intercepts to protect against imminent harm during the remainder of this incident.”

The documents also indicated that two female undercover police officers befriended the group, which debated letting the two help transport the guns in a hockey bag. The RCMP subsequently executed the “imminent harm” wiretap the next day, according to the documents.

Olienick interacted with at least three undercover operatives at Coutts, according to the ITOs, the Globe reported.

He told undercover officers that he was staying in a camper in Coutts and had access to weapons, the documents said. On Feb. 10, he asked the two undercover police if they could help with “a delivery.” Carbert, who was introduced to the two undercover operatives, said the “bags would be too heavy for [the two] to carry,” said one of the documents. One operative said they were fine carrying guns and neither Olienick nor Carbert “denied it was guns in the bag.”

Olienick’s lawyer told the Globe that he is concerned that if the publication ban on the documents were lifted, it could affect his client’s right to a fair trial.

The protest at the Coutts border was one of several blockades of Canada-U.S. border crossings, held in solidarity with the truckers’ Freedom Convoy protest in Ottawa. The Coutts blockade ended on Feb. 15, a day after the police raided the group planning the attempted murder. The organizers of the protest said they were there to protest peacefully and didn’t condone such acts of violence.

The Freedom Convoy protest first began to protest the federal COVID-19 vaccine mandate imposed on all cross-border truck drivers. Massive convoys of trucks and supporters in other vehicles arrived at the national capital in late January to call on the government to withdraw other pandemic-related restrictions.

The Liberal government, however, invoked the Emergencies Act on Feb. 14, giving the police special powers to remove the demonstrators from Ottawa’s downtown core in escalated operation over the next few days, although most of the demonstrations across the country had already ended by that time.

The Act allowed the police to compel tow truck companies to tow away the vehicles parked in the city, while financial institutions froze the bank accounts of those who allegedly donated to the convoy, though it was later reported that banks also froze other accounts not listed by the RCMP, using “their own determinations.”

Several civil liberties groups have criticized the invocation of the Emergencies Act, saying that the measure violated the Charter-protected rights and freedoms, and have launched legal challenges against the government.