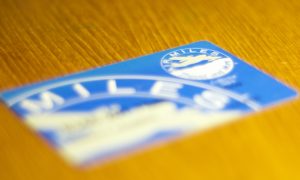 EDMONTON—Former Alberta premier Alison Redford is denying any personal wrongdoing associated with findings by the auditor general that passenger lists on government aircraft were altered so she could fly alone.

Redford issued the denial via Twitter on Tuesday, noting she has not been able to read the auditor general’s draft report because it has not been provided to her.

“But I have cooperated fully with the auditor general in the preparation of his report and will continue to do so,” she said.

“It would not be true to suggest that I flew on the government plane alone. Despite the allegations raised today, as far as I am concerned there was never any directive preventing others from flying on government aircraft when I was a passenger. In fact, on most occasions that I can recall, when I was on government flights, I travelled with other elected officials, public servants and staff.”

Alberta’s Wildrose Opposition says there should be an RCMP investigation into Redford’s use of government aircraft.

Wildrose finance critic Rob Anderson says the public has an expectation that politicians who may have broken the law should be investigated.

A CBC News report on Tuesday said a review by auditor general Merwan Saher found that Redford’s staff blocked others from flying on government planes by booking seats in advance and then removing passenger names before printing the flight manifest.

“The implications of this practice were that other government employees or elected officials would not have been able to travel on those aircraft,” Saher said in an internal government report obtained by the CBC.

Anderson said it appears the governing Progressive Conservatives were using the planes as “personal air limousines.”

“The PCs will undoubtedly try and pin this all on Ms. Redford and her departed staff as though they had absolutely nothing to do with it,” Anderson said.

“The fact is, there is simply no way that these actions could have been taken without other senior government staff and cabinet ministers knowing full well about
it.”

Global Edmonton quoted unnamed sources as saying Alberta Justice Minister Jonathan Denis has asked that all relevant documents be forwarded to the RCMP so that they can conduct an independent investigation if one is warranted.

Denis could not be reached for comment but issued the following tweet: “To be clear, the GOA would cooperate fully with any RCMP investigation into the use of (government) aircraft, including providing any info requested.”

Saher isn’t scheduled to release the report until next month, but a spokeswoman for Premier Dave Hancock said he would like the timeline pushed up. Kathleen Range said Hancock is concerned about the information in the leaked report, but she added he couldn’t comment until he has actually seen it himself.

“He’s concerned about the information and he does want to have that info in his hands as soon as possible,” Range said.

“We’re encouraging the auditor general to release the review and the report and the recommendations as soon as possible.”

Redford resigned as premier on March 23 amid caucus complaints about her lavish spending. It was Redford who, before she resigned, asked the auditor general to review the government’s flight program.

CBC News quoted the auditor’s report as saying that “false passengers” were booked on some government flights so Redford could fly alone.

The network said the auditor’s report also said Redford and her former chief of staff denied any knowledge of the altered passenger lists.

The CBC said Redford told the auditor general she did not request the government planes, but the report notes that, in every case, the request came from the premier’s office.

The three candidates who are running to replace Redford as PC leader all expressed anger about the findings.

Two of them, Ric McIver and Thomas Lukaszuk, were ministers in Redford’s cabinet before they stepped down to run for the leadership. They denied knowing anything about what was going on.

“The former premier preferred to fly alone. That, in and of itself, is something I knew would be disclosed in the public expenses and flight manifests,” McIver said.

Lukaszuk said if he became premier and if the findings are accurate, he will ask the PC caucus whether Redford should be ejected.

Candidate Jim Prentice, a former federal Conservative cabinet minister, noted in a release that he was not part of the previous government.

“Albertans do not need excuses from those who were at the table when these decisions were made. They need new leadership and a government that will hold themselves to the highest ethical standard,” Prentice said.

Opposition parties were already calling last spring for the province to scrap its fleet of four turboprop planes. Hancock has said the planes are sometimes the best and only way for government officials to get into remote communities.

Shortly before her resignation, Redford admitted to flying her daughter and her daughter’s friend around on a handful of flights and paid back the equivalent airfares. She also admitted taking a government plane to a family funeral in Vancouver and bringing a plane in to fly her back from a Palm Springs vacation.

She also paid back $45,000 spent on travel to and from South Africa for Nelson Mandela’s funeral in December. Redford and her aide flew to Ottawa, where the premier joined the prime minister’s entourage. Her aide, however, took a commercial flight to South Africa.

He and Redford returned to Alberta first class on another commercial flight so she could attend the swearing-in of her new cabinet.

CBC News said the auditor’s review found she could have returned on the prime minister’s plane in time for the swearing-in.

The network said Saher also concluded that Redford derived a personal benefit by taking her daughter on flights and added that she used a government plane for trips where there were commercial options.

With files from CHED