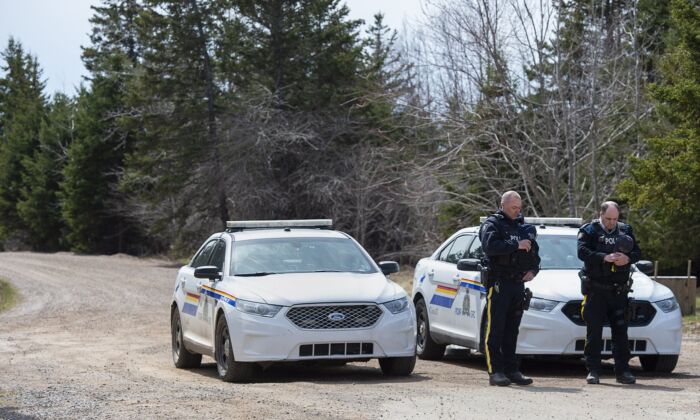 Two RCMP officers observe a moment of silence to honour slain Const. Heidi Stevenson and the other 21 victims of the mass killings at a checkpoint on Portapique Road in Portapique, N.S. on April 24, 2020. (The Canadian Press/Andrew Vaughan)
Canada

In the seconds after a Mountie sped past a gunman wanted for a murderous rampage in Nova Scotia two years ago, the officer hesitated about whether to give chase, and by the time he did the suspect was gone.

Public inquiry documents released Thursday describe in detail for the first time an encounter between Cpl. Rodney Peterson and the killer on April 19, 2020. The two men—one a real Mountie and the other an impostor in a police uniform driving a replica RCMP vehicle—passed in opposite directions just before 9:48 a.m. on Highway 4 in the community of Glenholme.

Peterson radioed to other RCMP members that the driver was wearing a reflective vest and “smiled as he went by,” prompting another officer to say, “That’s him. That’s got to be him.”

The corporal had come on shift that morning with instructions to look out for a patrol car and to wear his body armour. Originally bound for Portapique, N.S., where the first 13 murders occurred on April 18, he had been diverted to the roadside scene where Lillian Campbell—the killer’s 16th victim—had been murdered that morning in Wentworth, N.S.

Moments after the killer went by him, fleeing the scene, Peterson struggled to determine his next move.

“I’m trying to decide, should I stop, slow down, talk to this person, or keep going?” Peterson would recall in an interview with commission lawyers.

“So, I said, ‘If I stop and this is the bad guy, I’m going to get shot here, I’m going to get killed. If I continue on, that will give me a chance to turn around and pursue him, or to do something,'” he told the interviewer.

However, in the seconds that followed, the officer found the road too narrow for a quick U-turn. He said he was worried that if he was too long in making the turn, the killer might return to shoot him, or oncoming traffic could hit him. According to the commission’s summary, Peterson turned around to give chase about 1.2 kilometres past where he and the gunman had crossed paths.

“At this point, I’m thinking, I’m going to get shot if I don’t do this correctly,” the officer said in the interview with the commission, explaining his decision to delay the turn. Later that day, in Enfield, N.S., Const. Chad Morrison would be shot and seriously injured in his car by the killer, while Const. Heidi Stevenson’s vehicle was rammed and she was fatally shot.

Meanwhile, unknown to Peterson, a second, tense drama was unfolding for a couple who lived along the highway—which would throw the officer off the chase.

According to the commission’s summary, the killer, Gabriel Wortman, turned into the driveway of Carole and Adam Fisher less than a minute after Peterson passed him.

Wortman knew Adam Fisher, an excavator, from a quote the contractor had provided at his residence in Portapique. The killer had also been at the Fishers’ Glenholme house once before, according to the summary.

He pulled up his replica RCMP vehicle at the end of their long driveway, behind the couple’s two vehicles where it was not easily visible from the highway. A grainy image captured by the couple’s video surveillance system shows him standing near the car, carrying what appears to be a rifle.

The killer knocked at the Fishers’ door and rang the doorbell, but they had both seen a warning on social media identifying Wortman and knew the danger he posed, a document tabled at the inquiry says.

Adam Fisher grabbed his 12-gauge shotgun, loaded it and he and his wife—both on the phone with 911—found hiding places at around 9:49 a.m. “If he comes up to my house, I’m going to blow his … head off,” Adam Fisher told the 911 operator.

The commission hasn’t provided an exact time for how long Wortman stayed around the house, but estimated—based on the travel time to the next destinations—it was about two minutes.

As this was occurring, the commission’s narrative indicates Peterson drove by the Fishers’ residence, travelling south on the highway, not realizing Wortman was there.

The officer continued on to Highway 4’s intersection with the Trans-Canada Highway, arriving around 9:50 a.m., when he heard from police dispatchers that Wortman had turned off to the Fishers’ house.

Meanwhile, the inquiry’s narrative suggests the killer got back in his replica RCMP car, drove north on Highway 4 and turned onto Plains Road, towards the small community of Debert, again eluding officers and emergency response teams racing toward the Fishers’ house.

He killed two more people on Plains Road, Kristen Beaton and Heather O’Brien, who were in their vehicles.

Beaton, who was pregnant with her second child, was a continuing care assistant with the Victoria Order of Nurses, on her way to work, while O’Brien, who was a licensed practical nurse with the VON, was on her day off.