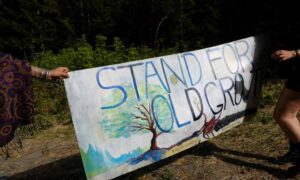 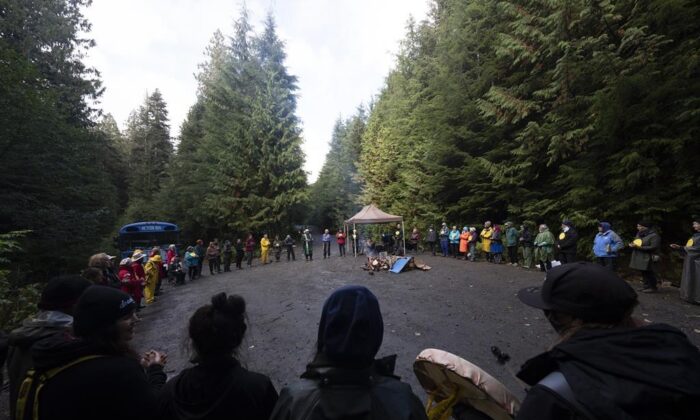 Elders for Ancient Forests along with people declaring themselves "land defenders" take part in a peace circle along a logging road in the Fairy Creek logging area near Port Renfrew, B.C., Oct. 5, 2021. (The Canadian Press/Jonathan Hayward )
Canada

VICTORIA—The RCMP are reviewing the department’s resources following the temporary reinstatement of an injunction against old−growth logging protests on southern Vancouver Island by the British Columbia Court of Appeal.

A B.C. Supreme Court judge refused to renew an injunction last month against protesters in the Fairy Creek area north of Port Renfrew, but Justice Sunni Stromberg-Stein granted a stay on Friday until forestry firm Teal Cedar Products Ltd. can argue at a full appeal of the lower-court ruling next month.

A statement from the RCMP’s E Division says the force is examining the court’s decision and assessing its resources when it comes to possible enforcement actions in the area, where police have made more than 1,100 arrests.

The RCMP say they have maintained a presence in the Fairy Creek area in support of nearby detachments since the lower-court judge refused to grant a one-year extension of the injunction.

Teal Cedar says in a statement it appealed the ruling to allow its employees and contractors lawful access to the forest.

Luke Wallace, a spokesman for protest group Rainforest Flying Squad, says people are preparing to spend a second winter in the forest, with their aim to continue to pressure the provincial government on reform of old-growth logging.