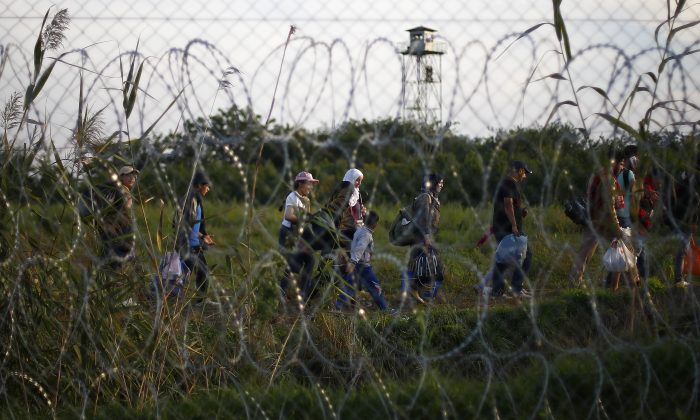 ROSZKE, Hungary—Hungary deployed a boxcar bristling with razor wire to close a key border crossing and warned of a new era of swift deportations Monday as governments across Europe debated how to share the burden of housing hundreds of thousands seeking refuge—and whether the continent’s hard-won policy of passport-free travel could survive the unrelenting flow of humanity.

In Brussels, ministers from the 28-nation bloc agreed to share responsibility for 40,000 people seeking refuge in overwhelmed Italy and Greece and spoke hopefully of reaching eventual agreement—possibly next month, or possibly by the end of the year—on which nations would take 120,000 more.

But their slow deliberations appeared disconnected from the rapidly shifting situation on the most besieged borders of Europe, where Austria, Slovakia, and even the Netherlands joined Germany in reintroducing border controls for the first time in a generation in a bid to record the arrivals of thousands daily from the Middle East, Asia, and Africa.

The checks, involving police on trains and on border roads, snarled traffic and slowed the speed and volume of migrants reaching Germany, which had received more than 60,000 newcomers since throwing open its borders on Sept. 5 to people trying to reach the EU heavyweight via Hungary, the Balkans, and Greece. Since Sunday those borders have grown tighter again, reflecting German unease at the sheer volume and lack of commitment from EU partners to share the load.

“If we don’t find a solution, then this chaos will be the result,” said Foreign Minister Jean Asselborn of Luxembourg, which holds the EU presidency. Germany’s decision to deploy police on borders and trains could trigger “a domino effect and then we can forget Schengen,” he said, referring to the 1985 agreement that gradually removed passport checks on most European borders.

Asselborn suggested that intolerance of foreigners lay behind some countries’ refusal to commit.

“Even a little country like Luxembourg is able to accept a few hundred people who are not of Christian religion, who have another skin color, and this should also work in big countries like Poland or the Czech Republic or Slovakia,” Asselborn said, listing some of the countries that have rejected Germany’s call for all EU members to accept minimum quotas for accepting people as refugees.

“This fear has to be overcome. For the moment, in certain countries, we’re not there yet.”

Hungary, a key link in the migrant chain, emphasized its determination to house as few asylum seekers as possible.

Prime Minister Viktor Orban warned that people walking into his country from non-EU member Serbia faced a new regime of swift rejection and deportation, given that Serbia today is a safe place to live.

New laws effective Tuesday also made it a criminal offense, punishable by prison or deportation, to damage Hungary’s newly erected border defenses. These include a 13-foot (4-meter) fence and, at a rail line that long served as the most popular crossing point, a boxcar on the line toughened with a seven-layer coil of razor wire. Underscoring the air of heightened security, Hungary ordered low-altitude airspace on the border reserved for police surveillance helicopters, while officers on horseback patrolled parts of the nearly 110-mile (175-kilometer) border.