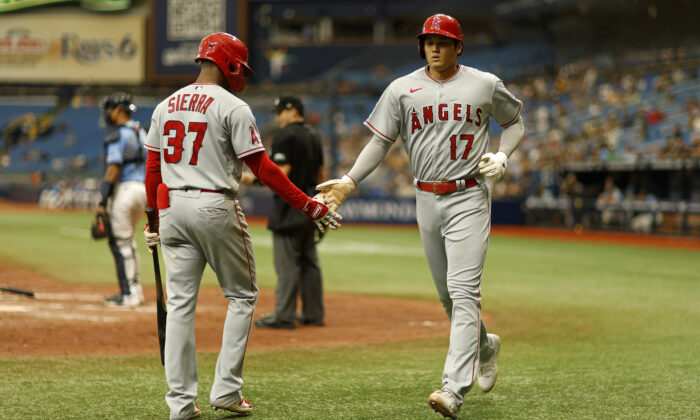 Shohei Ohtani #17 of the Los Angeles Angels is congratulated after scoring a run in the eighth inning during a game against the Tampa Bay Rays at Tropicana Field in St Petersburg, Flor., August 25, 2022. (Mike Ehrmann/Getty Images)
Baseball

Manuel Margot had four hits to lead the host Tampa Bay Rays to an 8–3 victory over the Los Angeles Angels on Thursday afternoon in St. Petersburg, Fla., and complete a four-game sweep.

The Rays extended their winning streak to six in a row. The Angels have lost six straight.

The Rays had just seven hits in all but made the most of them. Margot laced a double and triple with two RBIs, Isaac Paredes hit a two-run homer and Harold Ramirez drove in three runs with a two-run single and RBI fielder’s choice.

The Rays set the tone with a five-run third inning against Angels starter Patrick Sandoval, who was coming off a four-hit shutout in his previous start.

Sandoval was hurt by a throwing error by second baseman David Fletcher in the inning, and as a result only one of the five runs was earned.

Margot got the scoring started with a two-run triple. Ramirez drove in the third run of the inning when he grounded into a fielder’s choice, and Paredes’ two-run homer capped the scoring.

Sandoval (4–9) stuck around and went six innings, allowing five runs (one earned) on five hits and one walk while striking out five.

Rays starter Drew Rasmussen (9–4) gave up a solo homer to Taylor Ward in the fourth inning and nothing else in 5 1/3 innings. In all, he gave up six hits and one walk while striking out nine.

The Rays added three runs in the seventh, with Yandy Diaz scoring on a wild pitch and Ramirez adding a two-run single.

The Angels scored two runs in the eighth inning, one on an RBI double by Shohei Ohtani and another on an RBI single by Jo Adell.

Angels center fielder Mike Trout, who had played six consecutive games following a 30-day absence because of a back injury, was given the day off.