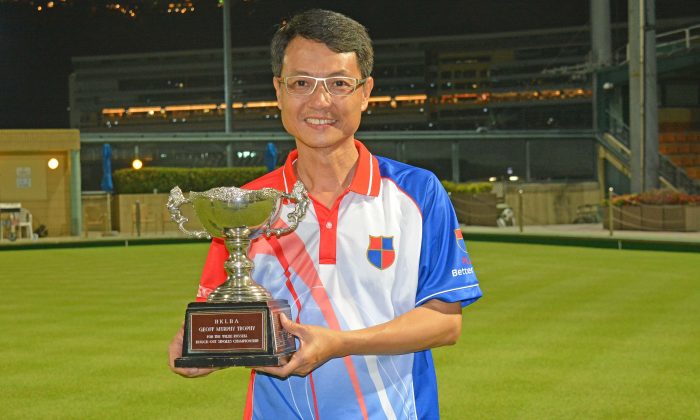 A total of 178 bowlers participated in the annual tournament, which was played in six clubs around Hong Kong, with the finals played at Hong Kong Football Club.

Ho, who represented Kowloon Bowling Green Club, has won the tournament twice before, in 2007 and 2011. He was with the Hong Kong team that competed at the World Bowls Championship in Christchurch last December and was in good form.  Ho defeated seven strong players, including Hong Kong Youth Team players James Tang, TH Po, last year’s runners-up Jordi Lo and Macau International Johnny Ng, to reach the final.

Chok, a three-time U25 Singles champion, was keen to break his deadlock in the senior singles competitions as he was the losing finalist in the National Singles, Indoor Singles and Champion of Champions Singles before.

The final started evenly and Chok was gradually gaining an upper hand, he opened a lead of five shots after eight ends.

Ho recalled the difficulties he has in the early stage of the game, “I was a bit tired and Robin was controlling play with his medium-to-short head strategy. As I know that he is not as good at heavy greens, I started to play long heads when I had the jack.”

His tactic worked fine and Ho slowly crawled back into the game. The game was tied at 13-13 after the 15th end. Ho continue to play long and took four shots in the next three ends to kill the game.

“I won because of my understanding of the opponent and made the right decision to change the tactic. I was really tired in the final but I have a special feeling about the Knock-out Singles so have a strong desire to win it. I am glad that I won it again,” said a delighted Ho.

Chok also echoed Ho’s comments, “The greens were getting heavier when night fell.  Despite I still got a good touch, it was difficult for me to play well on heavy greens as this is not really my strength. Raymond saw my weakness and started to play long. He could manage it so he won.”

Regardless of the lost Chok was still happy with his performance because he thought runners-up was not a bad result. This also completed his collection of runners-up for all the singles event in Hong Kong.

The National Knock-out Singles has a tradition of playing all games within one day, representing a tough test on physical fitness, mental toughness and stamina of the competitors.

The Triples League continues this Saturday, Jan 14 at all greens in Hong Kong with matches starting at 2:30pm.