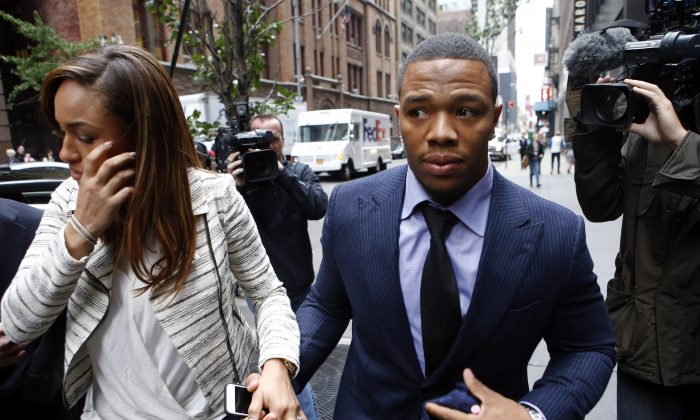 Ray Rice will not sign with the Denver Broncos, but a satirical website is saying otherwise. Ray Rice arrives with his wife Janay Palmer for an appeal hearing of his indefinite suspension from the NFL, Wednesday, Nov. 5, 2014, in New York. (AP Photo/Jason DeCrow)
Life & Tradition

Fake news site Empire News published an article saying Rice, who was reinstated by the NFL this week, would play for the Broncos this Sunday.

The site has a disclaimer, which reads: “Empire News is a satirical and entertainment website. We only use invented names in all our stories, except in cases when public figures are being satirized. Any other use of real names is accidental and coincidental.”

“Recently reinstated by the NFL after being indefinitely suspended for most of the season, Ray Rice has signed with the Denver Broncos and is expected to play immediately following finalization of the pending contract offer,” the article reads in part.

It also includes fake quotes from Rice and others.

“Ray Rice on the broncos now hmmm idk how to feel bout this,” one person tweeted.

Added another, “Ray rice with the Broncos woah now.”

But in actual, real news about the Rice situation, his former team issued a statement on claims made by his wife, Janay.

“After Ray informed the Ravens that Janay wanted also to speak at the event, I asked Ray on two different days if Ray wanted me to speak with Janay in advance of the press session. Both times, Ray declined and said: ‘She’s good. She knows what she wants to say,'” Baltimore Ravens spokesman Kevin Byrne stated Wednesday, via ESPN.

“At no time prior to the May 23 session did we provide talking points, a script or suggested script to Janay or speak with her about the press event. We did not recommend or suggest to Ray or Janay that she apologize in any way.”