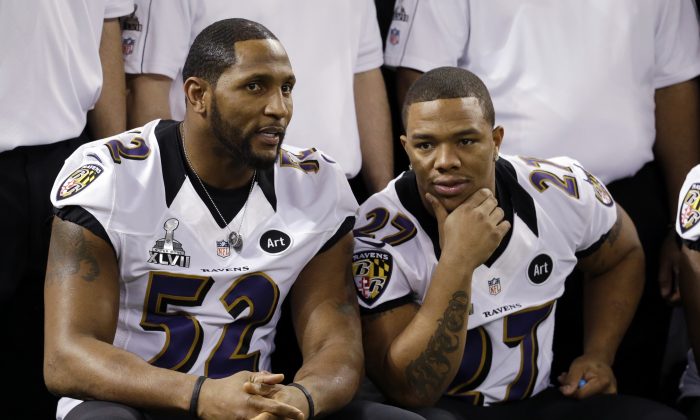 Lewis himself was embroiled in a domestic violence controversy while in the league, and was one of Rice’s mentor while they both played for the Ravens.

“I’m disappointed. This is personal for me,” Lewis said on-air. “I’m torn because this is a guy, a young man, I really took up under my wing and tried to mentor to make sure he had a successful career and stayed away from things like this.

“My mom went through that. It was one of the greatest things that drove me in my life, was to make sure a man never touched my mom again. I witnessed that. There were times I went through beatings with her.

“For me, it stings. It stings because I’ve always — he’s a friend. he’s a friend. I’ve always tried to take this young man in and give him something different, teach him something different, educate him while he was going along this process. … When you watch this video you see that something was lost by him, by this young man. Some leadership was lost. He got out there and started doing his own thing. And that’s what happened. What’s in the dark is going to come to light.”

Lewis said he spoke with Ravens owner Steve Bisciotti, and emphasized that “One thing [Bisciotti] made clear, there was no comparison of me and Ray Rice. It’s night and day. It’s night and day with anything we’ve ever been through.”