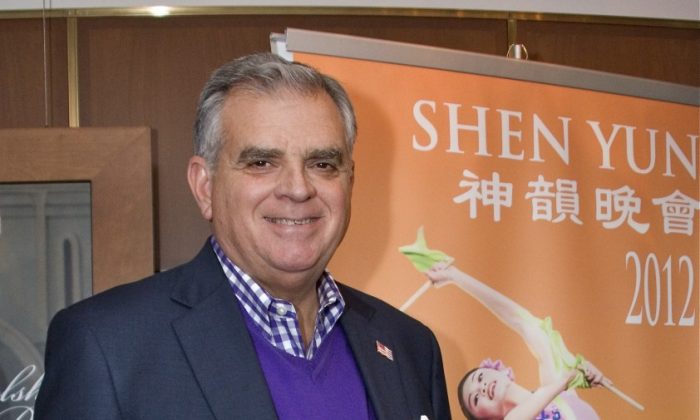 WASHINGTON—United States Secretary of Transportation Ray LaHood and his wife, had been wanting to see Shen Yun Performing Arts and finally made it on Sunday March 25.

“I’d give it an A-plus,” Mr. LaHood said after seeing Shen Yun at the Kennedy Center Opera House in Washington. “We live across from the Kennedy, so we like to come to the Kennedy—we wanted to see this performance.”

“I work with President Obama as his secretary of transportation,” Mr. LaHood said modestly. He heads an agency with “more than 55,000 employees and a $70 billion budget that oversees air, maritime, and surface transportation,” according to the U.S. Transportion Department.

Mr. LaHood was appointed the 16th secretary of transportation by President Obama in 2009. “Few understand our infrastructure challenge better than the outstanding public servant that I’m asking to lead the Department of Transportation,” the president said on announcing Mr. LaHood’s appointment.

Before his appointment, Mr. LaHood had served as a House representative for the district of Illinois for 14 years.

The transportion secretary enjoyed Shen Yun on many levels, acknowledging the music, costumes, and scenery as all beautiful.

After more than 60 years of communist rule in China, and especially during the Cultural Revolution, traditional Chinese culture was all but wiped out. New York-based Shen Yun has as its mission to restore and revive Chinese culture.

“A performance by Shen Yun is a presentation of traditional Chinese culture as it once was: a study in grace, wisdom, and the virtues distilled from the five millennia of Chinese civilization.” the Shen Yun website explains.

Mr. LaHood noted the quality of the performance saying, “The precision of the dancers is just perfect.”

At the core of Shen Yun’s performances is classical Chinese dance. It has been passed down through the dynasties, from within the imperial palace and from ancient Chinese theater and opera.

Today it is “a complete system of dance embodying traditional aesthetic principles with its unique dance movements, rhythms, and inner meaning,” the company website says.

Mr. LaHood was grateful that he had been able to experience Shen Yun, “I’ll definitely recommend it,” he said. “It’s beautiful.”