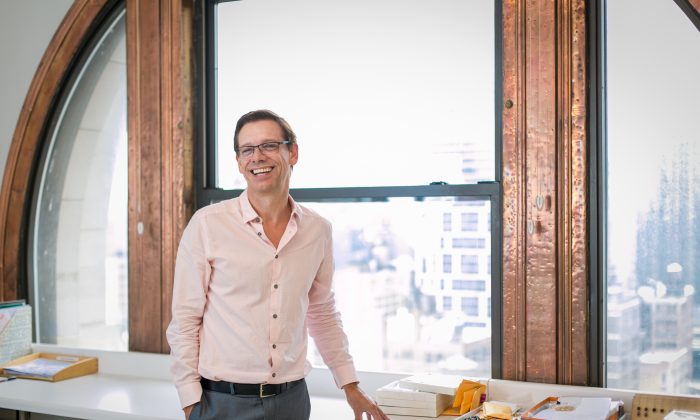 NEW YORK—”Originally I was trained to make it so you couldn’t see the underside of crowns and tiaras,” said jeweler Ray Griffiths. “And then somebody said to me, ‘Why don’t you make it so that you can see it?'”

That was the eureka moment when he realized the potential of crown work.

The New York jewelry designer who hails from Melbourne, Australia, has become known throughout the United States for his distinctive style that grew out of his love of architecture, history, and his solid training in restoring Victorian jewelry.

Looking at his necklaces and new collection of Regency-period inspired rings, it’s easy to see just how aesthetically suited his grid-patterned crown work is to modern taste.

A Brand Is Born

The style of Griffiths’s work is so unique that he has been able to patent it and, as of last year, his crown work is trademarked.

“I like the origin of crown work, the antiquity of it, the labor-intensive nature of it, and I like its aesthetic value,” Griffiths said, adding that he was also happy to discover that he could make it into any shape that he desired.

His crown work can stand on its own, as in the case of the necklace made out of gold graduated crown work squares, or it serves as a striking geometric contrast in his one of a kind cocktail ring featuring  a 5.1 carat cabochon opal and pave diamonds set in 18 kt yellow gold crown work.

Griffiths is in love with history as much as the craft of jewelry making, and he confesses: “I’m still working with antiquity—everything is extrapolated from history. Crown work just became a working tool for me to express a historical value.”

The result is a ring that possesses an Old World opulence yet perfectly suited for everyday wear.

Laid out on a velvet cloth in front of him was an array of sparkling Regency rings, which have been a great success for Griffiths because of the way he translated the classical style into his own signature. Using the Regency style, popular during the early 18th century to mid-19th century in England as a starting point, he architecturalized it and made it very linear, clean, and curved the tops.

The result is a ring that possesses an Old World opulence yet perfectly suited for everyday wear.

The same can be said for his multistrand necklaces, also known as riviera necklaces, in vivid colors created to be mixed and matched. He demonstrated this by holding up a tanzanite necklace with 18 karat yellow gold crown work balls and added to it blue riviera necklace with the same style of gold crown work. The resulting effect is the amazing impact of tanzanite blue, in a chic and artistic modern style.

Because of Griffiths’ experience in antique jewelry restoration he is also becoming known for his skillful handling of family heirlooms in need of lots of TLC—meaning significant repair.

He recounted the story of a customer who presented Griffiths with an engagement ring  that had been in her family for three generations. It had a chipped old South African diamond, with worn out claws and a band that was also thin from wearing it alongside other rings.

As she gave Griffiths the ring she said, “Let me tell you about the ring.”

Griffiths replied, “Let me tell you about it,” explaining where the diamond that was over two carats would have been cut and where the ring would have been manufactured, dates, and places. Surprised, she confirmed that Griffiths was right since the date of the ring was indeed around the time when her grandparents got married.

Once the ring was restored and Griffiths presented it to the customer, she got all teary about it. The original design was the same but completely revamped and repaired.

“Basically, the difference between what she gave us, and what she got back, was like night and day. It was a brand new ring that was ready to go another hundred years,” said Griffiths.

Sometimes he needs a few weeks to figure out how to restore a piece, and there’s the trust factor as well. Griffiths approaches restoration work “gingerly” so as to preserve the integrity of each piece.

Jewelry is generational, it’s the journey of the family that encapsulates your history.
— Ray Griffiths, jewelry designer

When dealing with restoration of damaged old diamonds he explains that part of the personality of old stones comes from the fact that they were cut by hand, “and I don’t want to take that away. But it all depends on what the customer wants,” said Griffiths, mentioning that in the case of family stones, customers are usually just as keen as he is to preserve the integrity of the stones.

“Jewelry is generational, it’s the journey of the family that encapsulates your history,” Griffiths said.

Each piece is a small learning curve for Griffiths. He recounted how another customer and friend brought to him, what looked like to her, a brooch. Upon seeing it Griffiths asked her “Where’s the other half?”

It turned out that the so-called brooch was half of a bow from an Austro-Hungarian empire tiara that had been pulled apart and used to make an engagement ring and a brooch.

It was the beginning of another surprising tale with a happy ending for both Griffiths and the customer, who didn’t just get back her restored family heirlooms, but also the whole story of their complicated provenance.