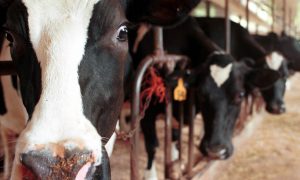 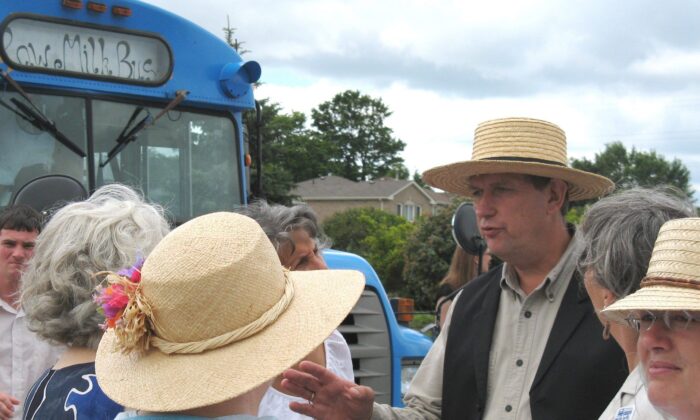 Dairy farmer and raw milk advocate Michael Schmidt talks to supporters outside court in Newmarket, Ont., on July 31, 2008. Schmidt has been fighting to make raw milk legal in Ontario for about two decades. (The Canadian Press/Colin Perkel)
Viewpoints

In 2010, when I first began representing dairy farmer Michael Schmidt in his quest to legalize raw milk sales in Ontario, only 26 states in the United States allowed any form of legal raw milk sales or distribution for human consumption. Today, after 10 years of hard work by consumers, farmers, scientists, and lawyers, that number has increased to 43 states. Another six allow sales of raw milk for use as pet food, but nobody polices who actually consumes it.

Raw milk sales are also legal in the United Kingdom, at regulated farms or via online sales. Queen Elizabeth herself drinks raw milk.

Meanwhile Ontario—and indeed, all of Canada—remains mired in science from the 1930s, when the sale of raw milk was first outlawed. With a few minor exceptions for aged cheeses, raw milk and its derivative products (butter, cheese, etc.) remain illegal for sale throughout the country.

This week (Nov. 17–20, 2020), proponents of raw milk legalization are duking it out with provincial and federal governments in Ontario’s Superior Court of Justice, under the eye of Madam Justice Shaun O’Brien.

This time, the raw milk advocates have marshalled an impressive amount of scientific evidence, much of it produced within the past decade. Most of it can be read in this 700-page Application Record. The cross-examinations of the government’s experts showed that they were embarrassingly unaware of recent developments in this field.

Even though raw milk can’t be sold, it can be legally consumed if you or your family own a cow. Surveys have shown that about 2 percent of Ontario residents drink raw milk. Some live on farms; others buy it on the black market. The government warns consumers that raw milk might harbour nasty germs—and indeed it might.

Statistically, however, the risks pale in comparison with the number of illnesses, hospitalizations, and even deaths (approximately 238 per year, the federal government says) caused by foods such as meat, eggs, fruits and vegetables. All of these can be legally purchased in thousands of outlets across the country. When an outbreak of foodborne illness occurs among these products, suspect batches are temporarily withdrawn from the market. For example, so far in 2020, there have been 25 food recalls for salmonella and 2 for listeria in products ranging from eggs to parsley to alfalfa sprouts to herring, but nobody would ever dream of outlawing these foods permanently.

If raw milk were as dangerous as the government alleges, its legalization in 17 additional U.S. states over the past 10 years should have brought about a wave of milk-borne illnesses and hospitalizations. Instead, the opposite has happened. A private voluntary organization called RAWMI (the Raw Milk Institute) has developed safety standards for farmers to follow. Experienced raw milk farmers will mentor newcomers to ensure that safe, clean, raw milk is produced. Black market producers can now emerge into the light of day, where they have a reputation to protect and liability insurance bills to pay.

Numerous studies on thousands of children across Europe have demonstrated a strong correlation between raw milk consumption and the prevention of allergies and asthma. According to Asthma Canada, approximately 3.8 million Canadians have asthma, and 250 of them die every year from it. Parents who want to protect their children are fully justified in weighing the risk of asthma against the negligible risk of drinking raw milk and choosing the latter for their kids.

Studies have shown that the pasteurization of milk reduces the content or bioavailability of numerous vitamins, minerals, enzymes, and probiotics. Raw milk, carefully produced, is simply a more healthful product than pasteurized milk.

Note that the demands of the raw milk advocates are extremely modest. Nobody is suggesting that pasteurization be outlawed, that raw milk be forced down the throats of unwilling consumers, or that it be sold to them surreptitiously without disclosing its raw state. On the contrary, the applicants are simply asking that they be granted an exemption from the existing legislation “to allow the processing, sale, and distribution of raw milk … in containers having a detailed warning label advising of the risks of consuming raw milk, directly to persons who wish to purchase and consume raw milk and/or raw milk products.” They cite their Charter rights to freedom of conscience and liberty.

What could possibly be wrong with that?

Karen Selick is a retired lawyer who worked on the issue of legalizing raw milk sales from 2010 to 2014. She is currently a freelance writer.