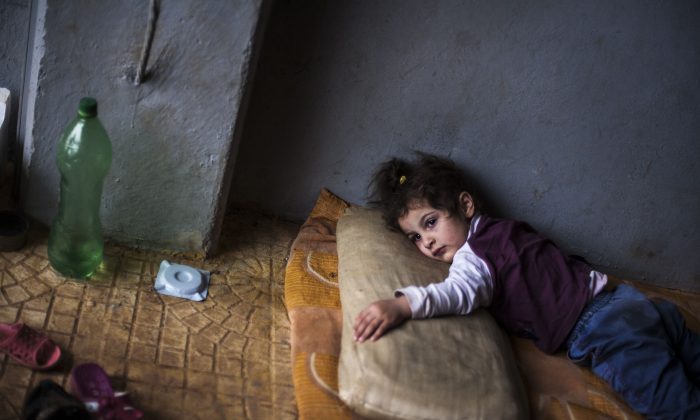 Rada Hallabi, 4, who is sick with diabetes, lies on a blanket in a refugee camp on the border with Turkey, near Azaz village, Syria, Sunday, Sept. 30, 2012. (AP Photo / Manu Brabo)
Middle East

Spaniard Manu Brabo studied photography in The School of Arts and Crafts in Oviedo and then journalism in Carlos III University in Madrid. His first big break came in 2011, coming on board with the Associated Press to cover the crisis in Libya.

Right away, Brabo started to submit photos with his signature style: Raw. He is the bona fide war zone photographer, he’s there shooting when the soldiers are shooting and he’s there afterwards photographing the wounded, the dead, and the living grieving over their dead. Sometimes, his images are so point-blank graphic, that they are painful to look at. And it is true that some pictures, though definitely impactful, I just couldn’t make myself to include in the gallery.

Perhaps it was this gutsy approach that caused Brabo to fall into Libyan captivity in 2011. Fortunately, he was later released.

Still in 2011, he moved to Egypt and in 2012 to Syria. Along with fellow AP photographers, Rodrigo Abd, Khalil Hamra, and Muhammed Muheisen, Brabo was awarded the 2013 Pulitzer Prize for Breaking News Photography.

His photos of the conflict in Syria are truly staggering. Not only does he capture the grief and suffering of the war, but also moments of joy and ordinary life. The war in Syria claimed estimated 30,000 lives and its repercussions are felt far beyond its borders, if only through the influx of Syrian refugees. It is people like Manu Brabo who remind us of its realities and sometimes also shake us up, hopefully to wake up our compassion.