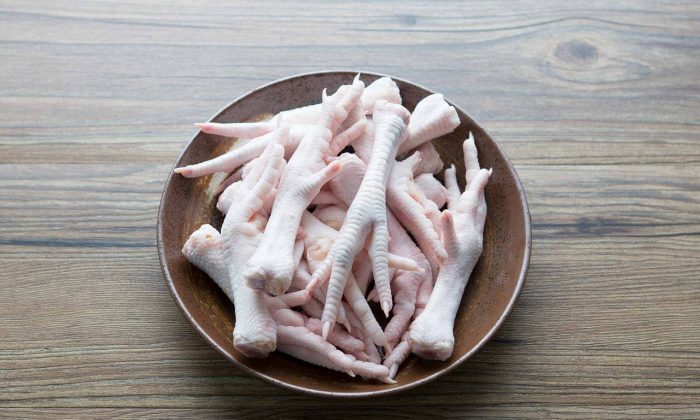 Viral video sparks debate over whether it's fake
By Jack Phillips

A viral video shows the moment raw chicken allegedly came back to life and fell off a table.

The footage was captured by Facebook user Rie Phillips, which saw more than 10 million views on the social media platform.

According to Phillips’s Facebook account, she’s from Florida, although it isn’t clear where the video footage was shot.

Because of the chopsticks, it would suggest the restaurant is Chinese, Japanese, Korean, or something similar.

Some users claimed the video was doctored, but other people said that the chicken movements were caused by nerve endings that haven’t yet died.

Other said that it wasn’t a chicken but another animal entirely.

Meanwhile, some claimed that the chicken was being moved by a string.

As of July 25, the video has been viewed nearly 10.5 million times and was shared and “liked” hundreds of thousands of times.

One person said, “Muscles contract when salt or any stimulant like it is present, much like how worms start to go crazy after you put some salt in there.”

“I have no idea ‘wtf’ that is but it’s moving because the nerves are still active and basically twitching,” a second Facebook user claimed. “This is the same scenario with some fish when fresh, they tend to contract so it looks as if they’re still alive even though they’re already bisected.”

But most people expressed horror over what they had witnessed, with one saying, “I’m mindblown. This [expletive] looks crazy. I’m glad I’m not her.”

According to Consumer Reports, as many as two-thirds of chickens bought in the United States might contain either Salmonella, Campylobacter, or both.

“Salmonella bacteria live in the gut of many farm animals, especially chicken. It can cause an infection of the intestinal tract in humans,” says Healthline.com.

According to a 2017 report from The Independent, raw chicken is apparently popular in Japan, and is referred to as chicken sashimi or chicken tartare.

“Some claim that raw foods are more nutritious than cooked foods because enzymes, along with some nutrients, are destroyed in the cooking process,” Nutritionist Rhiannon Lambert explained to The Independent. “Yet, some foods contain unsafe bacteria and microorganisms that are only eliminated by cooking. Eating a completely raw diet that includes fish and meat comes with a risk of developing a foodborne illness. Depending on where you’re eating, there may be better or worse food safety standards.”

She added: “In the UK, the NHS suggests campylobacter bacteria are the most common cause of food poisoning. This bacteria along with salmonella and e.coli are usually found on raw or undercooked meat, especially chicken. Another concern is cross-contamination which can happen if you prepare raw chicken on a chopping board and don’t wash the board before preparing food that won’t be cooked such as salad.”

Don’t wash your raw chicken! Washing can spread germs from the chicken to other food or utensils in the kitchen. https://t.co/QlFpd1alG3 pic.twitter.com/bLB1ofcuh7

The U.S. Centers for Disease Control this year also posted a warning to remind people not to wash raw chicken.

“Washing can spread germs from the chicken to other food or utensils in the kitchen,” the agency wrote on April 26.