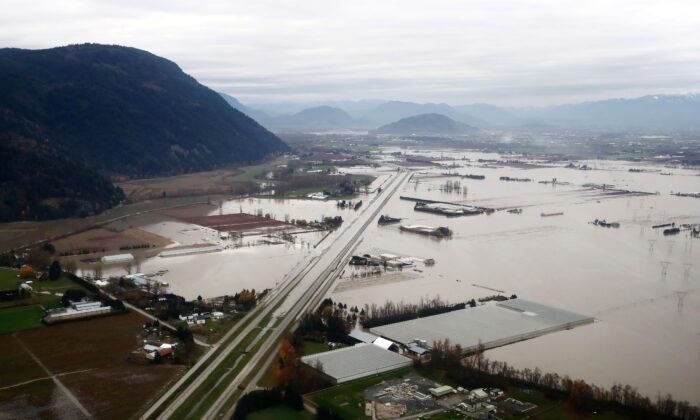 Flooded farms along the Trans-Canada Highway in Abbotsford, B.C., on Nov. 22, 2021. (The Canadian Press/Darryl Dyck)
Canada

Two residents of Sumas Prairie in the Abbotsford, B.C., area near the Canada-U.S. border have launched a class action lawsuit against three levels of government seeking damages for losses caused by flooding last November.

In mid-November 2021, southern B.C. was hit by heavy rains that led to two breaches of the Sumas dike, causing the embankment to overflow and later break apart. The resulting flood covered the Sumas Prairie, forced 15,000 people from their homes, and created extensive damage to properties, lands, and livestock.

Business owners Caroline Mostertman and Ted Dykman initiated a lawsuit in December 2021 against the City of Abbotsford, the Fraser Valley Regional District (FVRD), the Province of British Columbia, and three unnamed companies responsible for monitoring for flooding at the respective municipal, regional, and provincial levels.

According to the statement of claim, not only did the defendants fail to warn of the impending flood in a timely manner, they “also failed to implement emergency measures and warnings when they knew or ought to have known that a flood impacting the Sumas Prairie was the foreseeable consequence of the weather preceding the Sumas Flood.”

“Residents of the Sumas Prairie, who had not been adequately notified of the impending disaster, watched helplessly as ravenous floodwaters tore through their land, burying their personal property and destroying their crops and farmland,” the claim says.

Mostertman, who co-owns a farm, a winery, a distillery company, and a plant and fish nursery, told The Epoch Times that even two days’ notice would have helped to mitigate losses.

Early in the flooding, the City of Abbotsford chose not to use the provincial emergency alert system and instead decided to make phone calls directly to the households in the Sumas Prairie area.

“Those 300 people know there’s an emergency just by looking out their window, so we didn’t want to alarm the whole city,” Mayor Henry Braun said at a press conference on Nov. 17.

At the end of November, Braun estimated that damage to his city alone amounted to $1 billion. In December, the Insurance Bureau of Canada said the flooding in southern B.C. was estimated to have caused $450 million in insured damage, but added that given the scale of the disaster, with major highways and other public infrastructure destroyed and supply chains choked, the overall economic losses will be much higher than the insured loss figure.

In addition, many of the affected residents, including Mostertman in the Sumas Prairie, have no flood insurance coverage due to being located in high-risk flood areas and floodplains.

Mosterman said she also could not qualify for the provincial disaster relief program, which she calls “a joke.” It disqualifies any business that grossed $1 million or more in a year, even if the business lost money, and that excludes most agricultural businesses common to the area.

The Sumas Prairie sits on low-lying fertile flatland that used to be under the waters of a lake called Sumas Lake. The federal government drained the lake in the early 1920s to transform the lake bed into productive farmland. The statement of claim notes that the area is a floodplain known for being susceptible to devastating floods. The three most notable floods occurred in 1894 and 1948, when the Fraser River overflowed, and in 1990, when the Nooksack River, which begins in Washington state, overflowed.

An engineering report on the Sumas dike was conducted for the province in 2015 as part of a Lower Mainland dike assessment. Northwest Hydraulic Consultants Ltd. gave the dike an “unacceptable” rating, the lowest rating possible, for its height, which it found to be approximately 0.6 metres (2 feet) lower than required to prevent flooding should the Nooksack River overflow. The engineers also wrote, “The dike is presently too low. The dike design profile likely needs to be updated. The dike geometry is substandard, causing concern.” But the required upgrades were never made.

Vancouver-based lawyer Anthony Vecchio filed the class action suit in the B.C. Supreme Court on Dec. 23 on behalf of all those who owned or had an interest in property affected by the Sumas Prairie flood.

B.C.’s Emergency Program Act protects governments from liability for actions they took or failed to take in an emergency unless gross negligence takes place, but Vecchio believes that that is what occurred.

“This was predictable. It was obvious and was preventable,’ Vecchio said in an interview.

“It meets the definition of gross negligence. They monitored, they knew there was a risk, [but] they failed to shore up the diking, [which] they could have done. This is a very strong case. The community deserved better.”

Vecchio added that “to the extent that people are vulnerable, it [raises] the standard of care for the government. That’s basically the law in British Columbia.”

The plaintiffs are seeking general, special, and punitive damages and relief for the legal costs of the lawsuit.

The Epoch Times reached out to the defendants for comment. The City of Abbotsford did not reply. Spokesperson Angelique Crowther of the FVRD said they had “no comment on pending lawsuits.”

Melody Wey at Emergency Management BC replied by email, stating: “The Province takes the health and safety of British Columbians seriously in emergency situations. As the issue is before the courts, we are not in a position to comment further.”