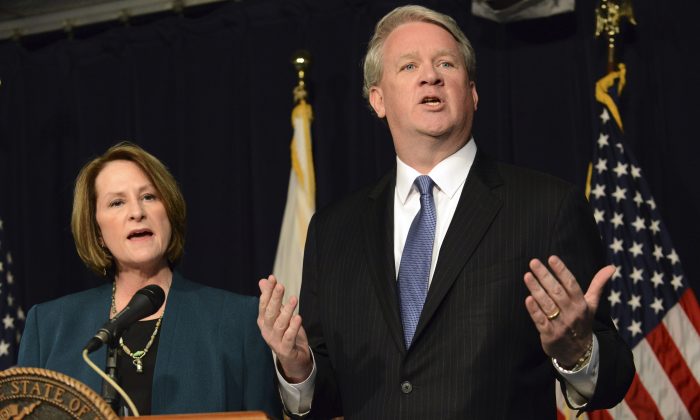 CHICAGO — Backed by Gov. Bruce Rauner, top Illinois Republicans called Wednesday for a state takeover of the financially troubled Chicago Public Schools, which faces a nearly $1 billion budget deficit that could lead to thousands of teacher layoffs and a possible strike in a matter of months.

Senate GOP Leader Christine Radogno called the plan a “lifeline” for CPS and Rauner said it’s a way to protect children and taxpayers, though Democrats quickly shot down the idea.

Radogno and House Republican Leader Jim Durkin said the legislation would give the Illinois State Board of Education control over the nation’s third-largest school district. They also noted that GOP lawmakers may reveal a bankruptcy plan for CPS and the city of Chicago in the coming weeks, but didn’t offer many details.

“What we’re proposing is a lifeline,” Radogno said of CPS, which has a massive unfunded pension liability. “We didn’t come to this lightly, but the track record of Chicago and its public school system is abysmal.”

The plan calls for the state schools superintendent, who is chosen by a governor-appointed board, to name up to seven members of an independent authority that would essentially replace Chicago’s school board, which is chosen by the mayor. They would also negotiate teacher contracts, though Republicans said the authority wouldn’t be able to “unilaterally cancel or modify” existing agreements.

At least seven districts in Illinois have come under state management since 2003, including East St. Louis in 2012, which was fought hard by people in the struggling St. Louis suburb.

Rauner announced his support for the takeover not long after Radogno and Durkin’s news conference, saying a new board and superintendent would “stand up for children and stand up for taxpayers the way the current administration has failed to do.” He also said that would include standing firm in negotiations with the Chicago Teachers Union on a new contract rather than using state money to help CPS, as Chicago Mayor Rahm Emanuel has requested.

But Democrats — who hold big majorities in both chambers of the Illinois Legislature, are close allies of Emanuel and are locked with Rauner on a long-overdue state budget — blasted the plan almost immediately.

“This is not going to happen,” Senate President John Cullerton said, calling the idea and a distraction from the state’s other problems.

The mayor was at a conference in Washington, D.C., but his spokeswoman said Emanuel is “100 percent opposed to Gov. Rauner’s ‘plan'” and accused Republicans of “trying desperately to distract from their own failures.”

“If the governor was serious about helping Chicago students, he should start by proposing — and passing — a budget that fully funds education and treats CPS students like every other child in the state,” Emanuel spokeswoman Kelley Quinn said.

For years, Emanuel has called for a change in state law regarding how pensions are funded. Currently, Chicago taxpayers cover the cost of city teachers’ pensions, while taxpayers statewide contribute to retirement funds for teachers outside Chicago — a system Emanuel argues is unfair because Chicago residents pay twice.

But Rauner has repeatedly said he won’t approve any help for Chicago until Emanuel gets behind legislative measures that the former businessman says will make Illinois more competitive. Those include allowing local governments to curb labor unions’ bargaining rights and making changes to workers’ compensation insurance. Emanuel has opposed those efforts, saying they would hurt the middle class.

Rauner noted the Democrat-led Legislature passed a measure in 2014 that allowed Illinois to take over districts other than CPS, and called their opposition to the latest plan unfair.

Emanuel already has dealt with stern criticism over allegations that his administration kept a video of a white officer shooting a black teenager under wraps until after he won a second term; protesters have repeatedly called him to step down.

CPS also is in the midst of contentious negotiations with the Chicago Teachers Union on a new contract. Union members last month overwhelmingly authorized their leaders to call a strike if needed, which was an attempt to pressure the district to avoid layoffs or severe cuts. The union, which went on strike in 2012, says a walkout would still be months away.

CTU officials called the plan an example where Rauner “clumsily attempts to lead” and that the plan is a “non-starter when state government has so far been unable to assume responsibility for its own budget.”