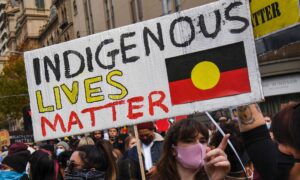 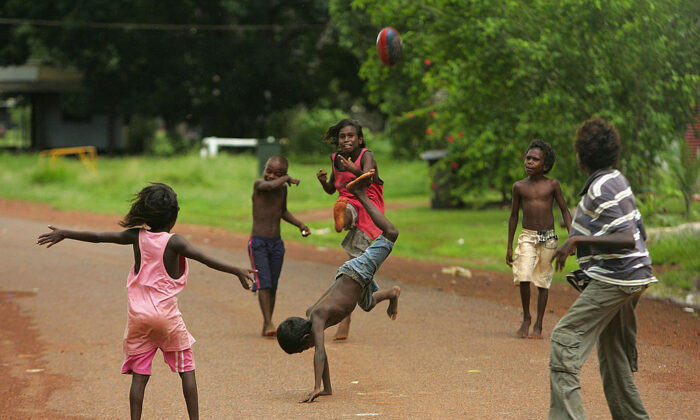 Children play football on the street on Tiwi Island on the December 23, 2007. (Ezra Shaw/Getty Images)
Australia

New figures show Indigenous children form a disproportionately large number of kids who have received child protection services, including for substantiated child abuse and neglect, children on care and protection orders, and children in out-of-home care.

A report released by the Australian Institute of Health and Welfare (AIHW), titled “Child protection Australia 2019–20,” shows one in every 18 Indigenous children—or 18,900—were in out-of-home child care services as of June 30 last year.

This is 11 times the rate for non-Indigenous children—or one in six.

Minister for Indigenous Australians Ken Wyatt told The Epoch Times in a statement on May 18 that the new figures reinforce how crucial the work under the National Agreement on Closing the Gap.

The Closing the Gap framework aims to reduce Indigenous disadvantage.

“It clearly shows the importance of work under Target 12—reducing the over-representation of Aboriginal and Torres Strait Islander children in care by 45 percent,” Wyatt said.

“It is incredibly important that we work closely with state and territory governments, Aboriginal and Torres Strait Islander people, their communities and organisations to address the issues that lead to children being removed from their families.”

The most common type of abuse found to have been experienced by Indigenous children in 2019-20 was emotional abuse—with 47 percent of 14,300 cases of a substantiation.

A substantiation is when a notification has been investigated, and there was reasonable cause to believe the child had been, was being, or was likely to be, abused, neglected, or otherwise harmed, AIHW spokesperson Dinesh Indraharan said.

“This is a national shame,” Catherine Liddle, the CEO of SNAICC, the national peak body for Indigenous children, told The Epoch Times on May 18.

“The federal government and the jurisdictions have all signed onto the Closing the Gap refresh, and that framework says ‘invest in community-led solutions.’ The reason we say that is because communities understand what their own relationships are, what their own challenges are, and they see the opportunities for change,’ she said.

Early intervention is when families and children need help to be strong and thrive, but Liddle said investment in this space was missing. She has called on the government to move fast to invest in Indigenous community-led services.

“The majority of funding relating to this is not directed towards early intervention,” she said. “At this stage, where it does exist, it goes to organisations that are non-Indigenous. While there is some money getting through to the Indigenous-led, community-led organisations, it is not on par with those big legacy services.”

Liddle is also concerned that only 52.4 percent of Indigenous children in out-of-home care were living with Indigenous carers.

“Our children are being separated from their cultures. This causes lifelong and intergenerational harm,” Liddle said in a media release.

The AIHW report shows that as of June 30 last year, 23,300 Indigenous children were on care and protection orders.